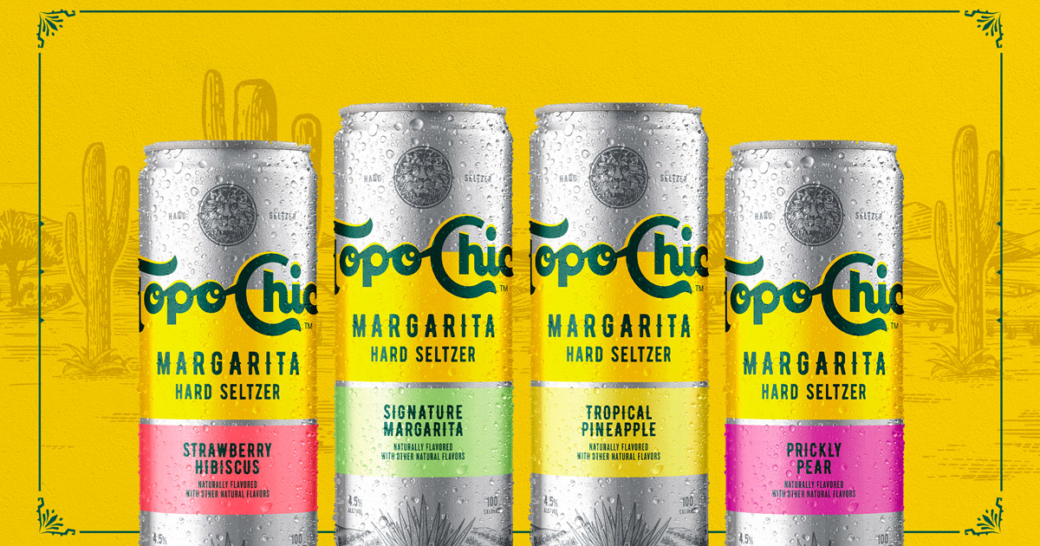 Following the release of Topo Chico Ranch Water Hard Seltzer and the national brand expansion this year, Topo Chico Hard Seltzer is shaking up the seltzer category once again with the Topo Chico Margarita Hard Seltzer variety pack, which is now available for purchase nationwide in the United States.

“Everyone loves a good margarita – it’s the No. 1 cocktail on-premise for a reason and a natural fit for a brand like Topo Chico Hard Seltzer,” says Matt Escalante, vice president of hard seltzers at Molson Coors Beverage Co. “So we took what drinkers look for in a margarita – everything from the salty rim to the exotic fruit flavors and citrusy finish – and put it into an easy-drinking hard seltzer.”

The Topo Chico Margarita Hard Seltzer variety pack features four exotic flavors that draw from beloved versions of the iconic Mexican drink, including Signature Margarita, Tropical Pineapple, Strawberry Hibiscus and Prickly Pear. Infused with notes of lime, salt, and tequila flavors, each captures the balanced complexity of a margarita but in hard seltzer form. Each flavor in the Topo Chico Margarita Hard Seltzer variety pack is in 12 fl. oz. cans and with 100 calories and 4.5% ABV per serving as well as standalone 24oz-ounce cans in Strawberry Guava . Signature Margarita will also be available in standalone 24-ounce cans.

For over two centuries Molson Coors has been brewing beverages that unite people for all of life’s moments. From Coors Light, Miller Lite, Molson Canadian, Carling, and Staropramen to Coors Banquet, Blue Moon Belgian White, Leinenkugel’s Summer Shandy, Creemore Springs and more, Molson Coors produces some of the most beloved and iconic beer brands ever made. While the company’s history is rooted in beer, Molson Coors offers a modern portfolio that expands beyond the beer aisle with sparkling cocktails, canned wine, kombucha, cider and more.