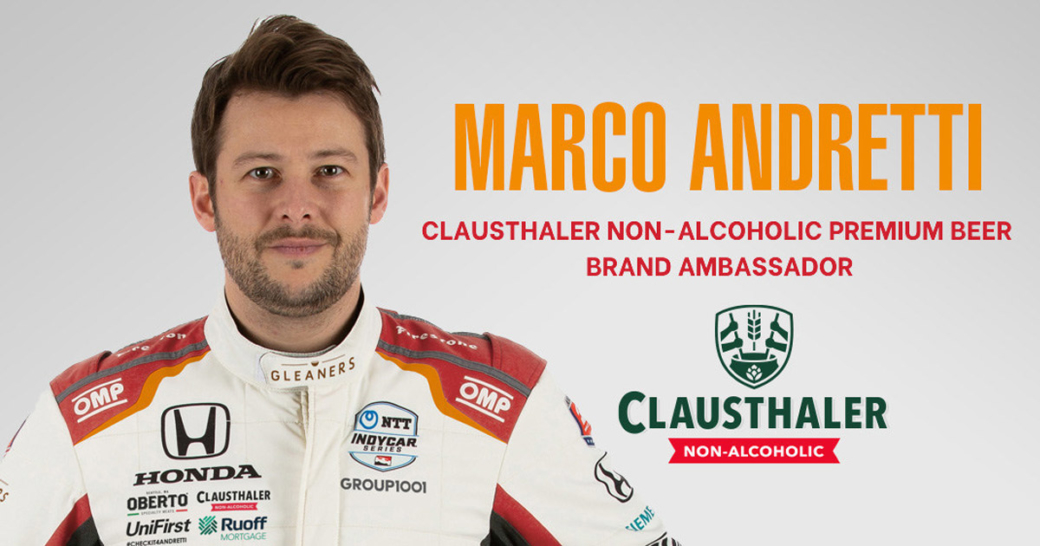 Radeberger Gruppe USA, an importer of brands of its parent company Radeberger Gruppe, the leading German brewing group, announced today that it has expanded its relationship with legendary racing team Andretti Autosport by sponsoring third-generation racer Marco Andretti for the 2021 Indianapolis 500 on behalf of its Clausthaler brand – the leading and most-awarded non-alcoholic beer in the industry.

Today’s news builds off the announcement earlier in the year of Clausthaler’s sponsorship of Alexander Rossi, also part of the Andretti Autosport NTT INDYCAR® SERIES team. Clausthaler will have a similarly structured agreement with Marco Andretti, becoming the Official Non-Alcoholic Beer of the No. 98 entry. The Clausthaler logo will be featured on the No. 98 GLEANERS FOOD BANK OF INDIANA Honda, driven by Marco Andretti in the 105th running of the Indianapolis 500 at the Indianapolis Motor Speedway on Sunday, May 30, 2021.

Marco Andretti is the son of CART champion Michael Andretti and grandson of Mario Andretti, one of the most successful race car drivers with over four decades of racing experience. At the age of 19, Marco became one of the youngest winners of a major open-wheel racing event and is currently in his 15th year of racing in INDYCAR where he has achieved numerous top-10 finishes throughout his career.

“Marco is a champion in his own right and follows a long family lineage of success,” said David Deuser, CEO of Sales and Marketing, Radeberger Gruppe USA. “Our partnership with him not only extends our relationship within the Andretti family, but it will undoubtedly bring increased awareness and exposure to the Clausthaler brand family to a larger audience base. We’re excited to now have two Clausthaler-sponsored cars in the most famous race of the year…the Indianapolis 500.”

Andretti Autosport has achieved more than 200 total race wins. Among them, four NTT INDYCAR SERIES championships, four Indy Lights titles and five victories at the famous Indianapolis 500-Mile Race. The company is led by Chairman and CEO Michael Andretti, one of the most successful drivers in the history of the sport. While Andretti is no longer leading the team from behind the wheel of the car, he is at the helm of the team’s business operations.

As with the Alexander Rossi agreement, Clausthaler and Andretti Autosport will be co-promoting the Clausthaler brand on social media channels, including Facebook and Instagram. Clausthaler will also be developing creative digital advertisements and is considering promoting exclusive experiences at various races throughout the year for its fans to win via Off-Premise retail display POS, social media and its website (www.clausthaler.us).

Finally, Radeberger Gruppe USA will be extending an invitation for Andretti Autosport executives, Marco Andretti and Alexander Rossi to the National Beer Wholesalers Association (NBWA) annual convention in Las Vegas (October 3-6) where they will have a large booth presence and networking activities centered around the Andretti Autosport partnership.

“It is great to have our partnership with Clausthaler and Radeberger Gruppe USA expanded,” said Michael Andretti, Chairman and CEO, Andretti Autosport. “Having Clausthaler and their ‘Taste Full Life’ campaign on board Marco’s No. 98 machine for the Indy 500 is a great pairing. We are looking forward to increasing the awareness of Clausthaler portfolio of products to our fan base”