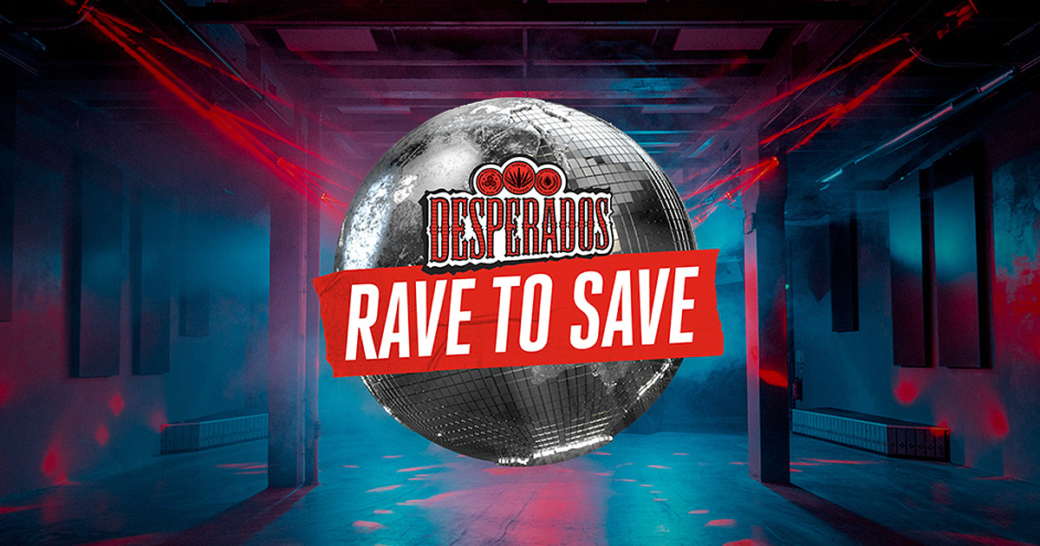 With thousands of nightclubs currently closed across the world, Desperados is calling on partygoers around the world to unite in support of the clubs they love with the launch of their Rave to Save app. People are invited to join a series of eight virtual parties that go beyond the obvious, where their dance moves at home will be turned into cash for clubs across Europe.

For every 1,000 steps taken by partygoers (approximately 10 minutes of dancing[1]) on the Rave to Save app, €1 will be donated to support the clubs. The Rave to Save app[2], available on the App Store, uses smartphone technology to track partygoers’ moves as they dance to epic beats on their home dancefloor.

App users can also boost how much they contribute by making a direct donation to clubs in Germany, UK and Spain that will be hosting the parties. This will then be matched by Desperados, up to €30,000 per event. The funds will be used by club owners to cover operational costs, including staff salaries and rent, depending on the final amount raised.

In partnership with Beatport, partygoers can start virtually raving from Berlin’s Prince Charles club on Saturday 27th March. After downloading the Rave to Save app, they will experience epic disco and house beats by headliner Purple Disco Machine, with support from Nakadia. The event will be livestreamed on Beatport’s Facebook and YouTube channels from 19:00 CET.

“Europe is home to some of the most incredible clubs and venues in the world. But all of that energy and vibrancy has been put on hold during the pandemic. Desperados’ Rave to Save app is providing venues with much needed support by encouraging people to do something they love – dance. People from all over the world can party together, donate together and make a difference together.” – International Music Producer and DJ Purple Disco Machine.

“With nightclubs and music venues forced to keep their doors shut for months, Europe’s nightlife sector has taken a big hit from the pandemic. At Desperados, we believe we have a responsibility to support an industry that is so deeply entrenched in our DNA. That’s why we’re thrilled to unite partygoers from around the world through our Rave to Save app. By dancing together, we can all support the venues we love so they’re ready to re-open their doors and welcome us all back when it’s safe to do so.” – Rutger van der Stegen, Global Marketing Manager, Desperados.

Rave to Save is Desperados’ latest initiative to keep the party spirit alive whilst we party apart during varying levels of lockdown. In 2020, with world-renowned party producer elrow, Desperados partnered with 31 international DJs across 7 iconic venues to live stream 16 sessions straight into people’s living rooms.

The virtual shows are the latest wild experiment in a series of innovative experiences and activations taking place in 2021 as part of Desperados’ new creative platform, Go Desperados. In embracing its spirit of playful experimentation, Go Desperados captures the essence of the brand – a beer that goes beyond the obvious, for people that do the same.

[1] Medibank. How to walk 10,000 steps. [2] Rave to Save app will be available for consumers of legal drinking age in the Apple & Google Play app stores