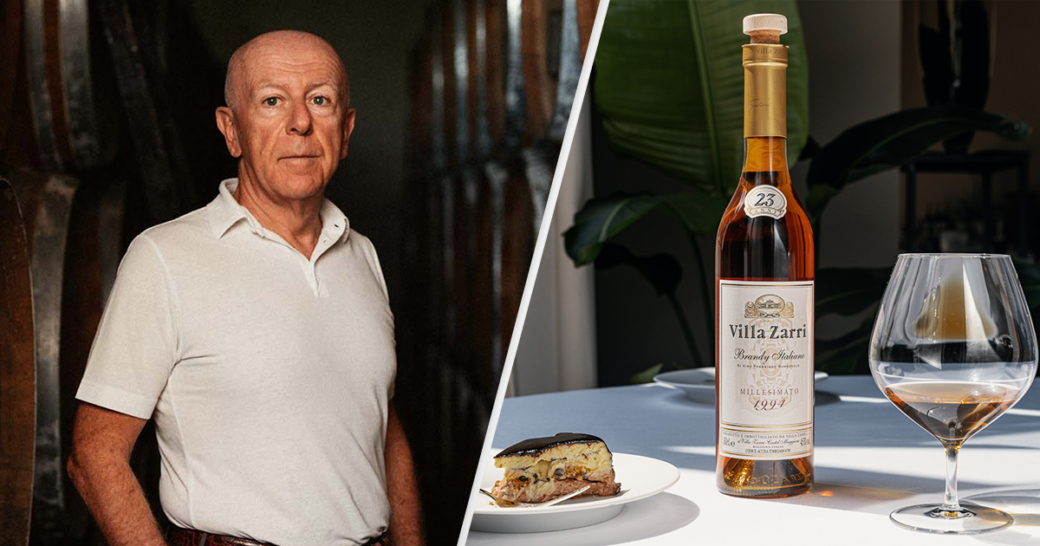 Guido Fini Zarri founded the Villa Zarri brand in 1989, and one year later he launched his first brandy, which he began producing in 1986. However, he had already gained experience in the family business from the end of the 1970s. Since then, he has focused on three essential things in the production of his products, which must be cultivated to perfection: the raw material to be distilled, the distillation process and the maturation. The Villa Zarri brandies are made from Trebbiano Romagnolo wine. For distillation, he uses the Charentais Alembic, a still that is also used for Cognac. Last but not least, the brandies mature over several years to develop the full aroma that makes each brandy unique.

Founder Guido Fini Zarri talks about the production, the different products and the history of the name Villa Zarri in this interview.

Guido Fini Zarri: Villa Zarri is an ancient historic residence built in 1578 by a noble Bolognese family, the Angelelli family. In the 1700s it was completely restored and brought to its present form. It was used as a country house by this family during the summer. My grandfather Leonida Zarri bought this villa in 1940. At that time he was working as general manager for the famous Buton company, producer of the Vecchia Romagna Brandy.

After the war my grandfather left Buton and bought a brandy and liqueur producer, Pilla, whose headquarters were on the island of Murano, in the Venice lagoon. He moved the company’s headquarters to Castel Maggiore, next to Villa Zarri. The business developed a lot, the Oro Pilla Brandy brand was created which developed a lot until the early 1980s. 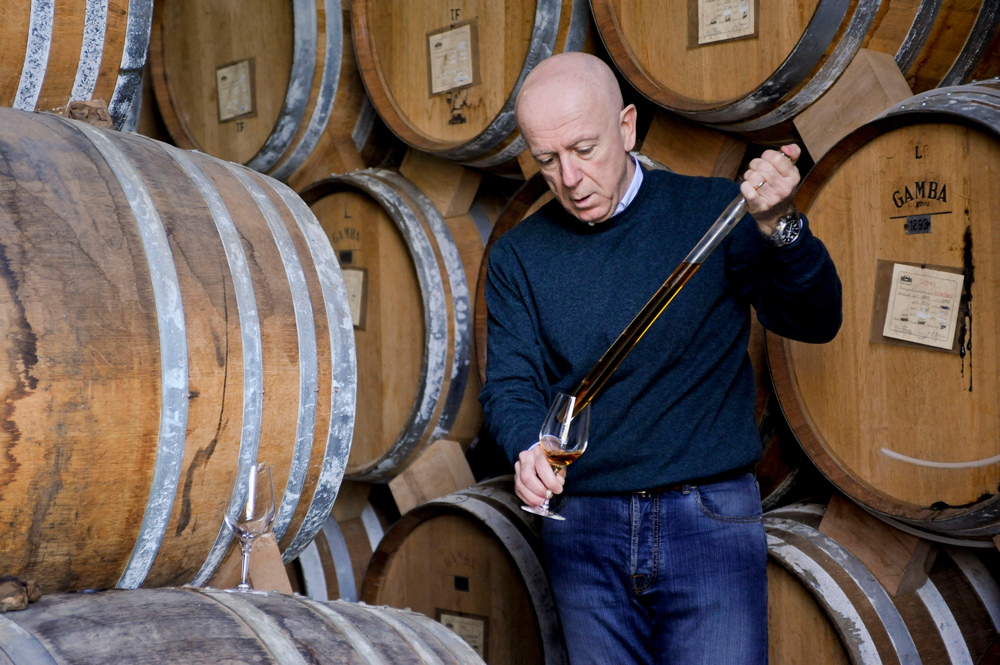 How long has the Villa Zarri brand been around? How did it come about?

Guido Fini Zarri: I started working in the family business in the late 1970s. At that time, the consumption of brandy in Italy began to decline, replaced by other spirits such as whisky and grappa. I came up with the idea of creating a new brandy of the highest quality, inspired by French Cognac.

My idea was to create an Italian Brandy that could match up, from a qualitative point of view, with Cognac and Armagnac. From this idea the Brandy Villa Zarri was born in 1986.

So you had contact with the spirits or brandy industry before Villa Zarri?!

Guido Fini Zarri: As I said previously, I started working in the family business after completing my studies in economics and I immediately perceived the need to change something in our brandy which was the most important product of the company.

I started the production of the new Villa Zarri brandy in 1986 and two years later, in 1988, I sold the Oro Pilla brand to Montenegro, the famous Amaro producer. At that point I transformed myself from an industrial producer to an artisan of brandy. 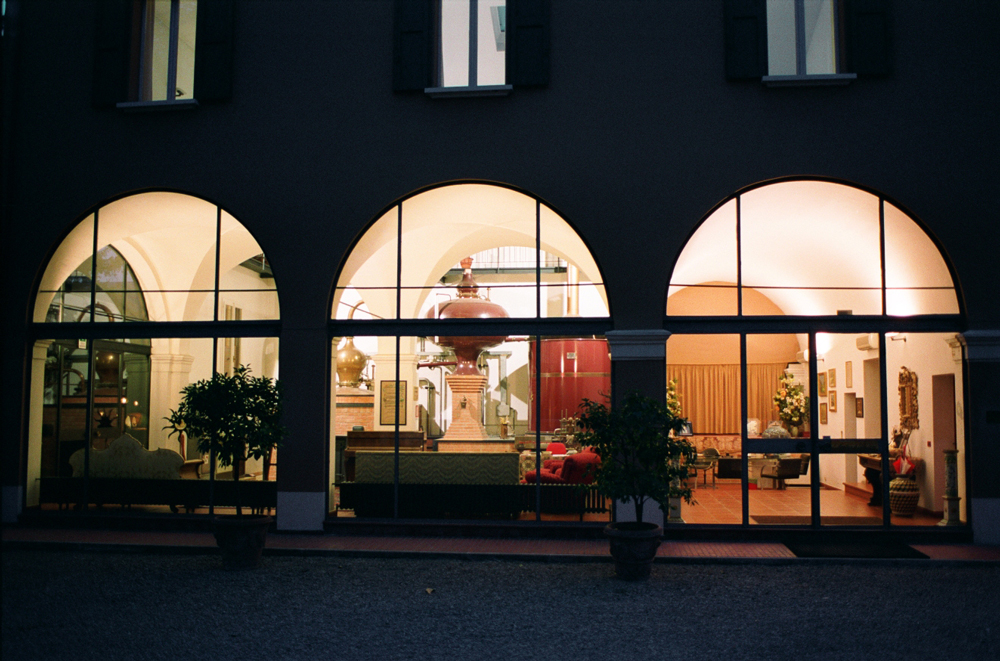 What does good brandy mean to you?

Guido Fini Zarri: For me, a good brandy is the result of the sum of three things that must be taken care of to perfection: the raw material to be distilled, the wine, the distillation process, the aging.

The wine must be suitable for the distillate you want to obtain; the distillation must be very accurate and carried out using an alembic that allows you to get the best out of the wine you distil; aging must be done using perfect oak barrels, in an ideal microclimate for aging. The sum of these three phases, all three very important, will give the final result.

What is the brandy market like in Italy and internationally?

Guido Fini Zarri: The brandy market is very varied because it includes products of the highest level such as Cognac, Armagnac (which fortunately for them have protected names), high quality brandies and industrial products. It is not easy for a small artisan producer like me to get noticed by the consumer.

Fortunately, in recent years, the movement of small artisan distilleries has been emerging all over the world, especially for the production of Whisky and gin. I am joining this movement and attention is growing a lot for my products as well. 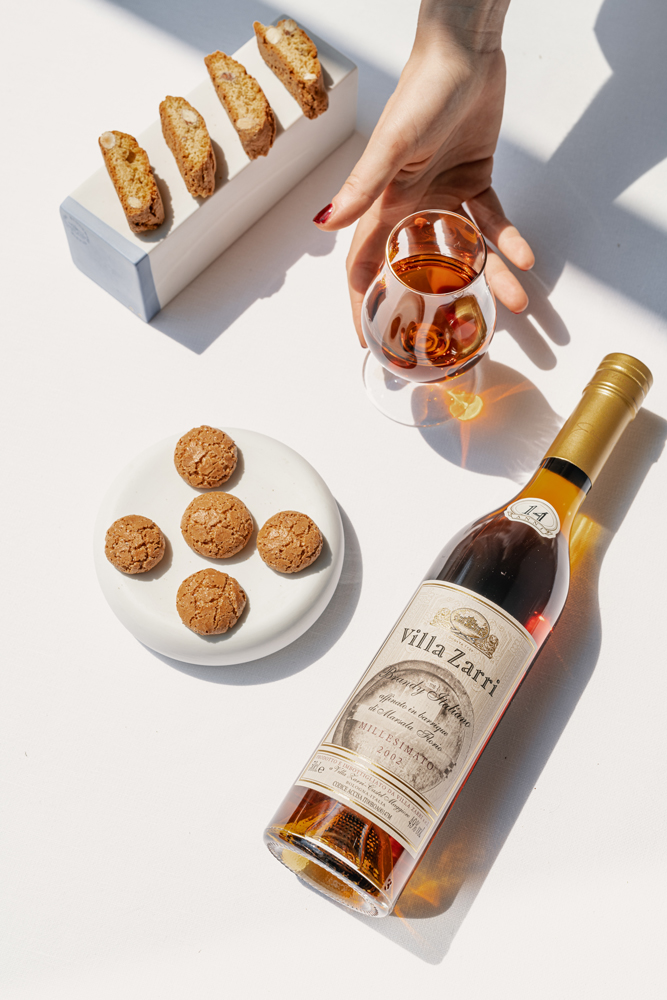 How long did you spend on the perfect recipe?

Guido Fini Zarri: There is no perfect recipe, perfection is not of this world. There is a tiring and laborious quest to make a blend of spirits each time that, when combined, give life to a brandy that you like very much, that reflects what you like. Or, in the case of a single cask, the search for that barrel that contains the brandy you are currently looking for. The characteristics I prefer for my brandies are: personality and elegance.

And how is your brandy made?

Guido Fini Zarri: My brandies are all produced starting from Trebbiano Romagnolo wine grown in Romagna, the eastern part of my region, about 50 km from my distillery. Trebbiano has ideal characteristics to be distilled: high acidity, low alcohol content, low aromaticity. The wine, which has an alcohol content of about 10%, must not contain sulfur dioxide which would combine with the copper of the still and produce copper sulphate, which is negative for the distillate.

As a distillation plant we use the Charentais Alembic, the same one used in Cognac. It is an artisanal plant, entirely made in copper, with which a double distillation is carried out: with the first one, a semi-finished product with about 30% alcohol is obtained which is subsequently redistilled to obtain the wine distillate with about 72% alcohol.

At this point the wine distillate is aged in new 350-litre French oak barrels. After one year of aging in new barrels, the brandy is transferred to used barrels, used for a minimum of 5 years, and there it is left to age for the rest of its aging. We do not bottle our brandies before 10 years of aging. Furthermore, our brandies are bottled completely naturally, without the addition of dyes, sugar and flavorings. 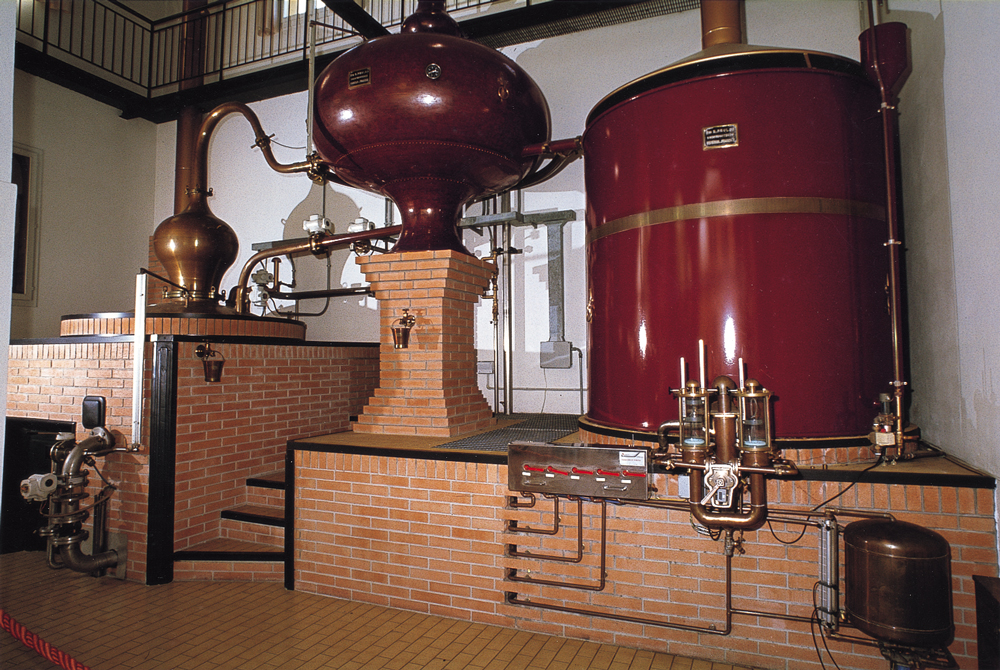 How important is the aging process for the products?

Guido Fini Zarri: The aging process is fundamental for the quality of the product. However, it must be specified that the distillate must be perfect in order to develop the great aromas that are obtained with long aging. If the distillate has defects at the start, aging can only make them worse.

Aging is a very slow process and it takes many years for the great aromas to develop. Unfortunately, but I say fortunately, this time can not be reduced. At the beginning the new barrel gives the brandy color and tannins of the wood. Subsequently, with the transfer to used barrels, the tannins of the wood and the alcohol are oxidized by the oxygen that penetrates inside the barrel through the micropores of the wood. Through this very slow oxidation process, the great tertiary aromas of the brandy are developed.

During aging, a lot of alcohol evaporates through the micropores of the wood. We have an average loss of about 2.5% per year of brandy by evaporation, the so-called angel share.

What products do you have in your portfolio?

Guido Fini Zarri: All my brandies are completely natural. I don’t add anything, no dyes, no aromas or sugar. We add just a little bit of distilled water during aging to slowly reduce the alcohol content of the distillates and bring it to that of consumption, 44/45%.

Our least aged Brandy has spent at least 10 years in the barrel, and that’s no small feat. Then we have products with greater aging, up to 30 years. We also bottle full proof brandies, without any dilution with water.

They are brandies with a strong personality, suitable for connoisseurs. Two other very interesting brandies are: the first infused with tobacco leaves grown in Tuscany, suitable for cigar smokers, the second aged in barrels that previously had contained Marsala wine. 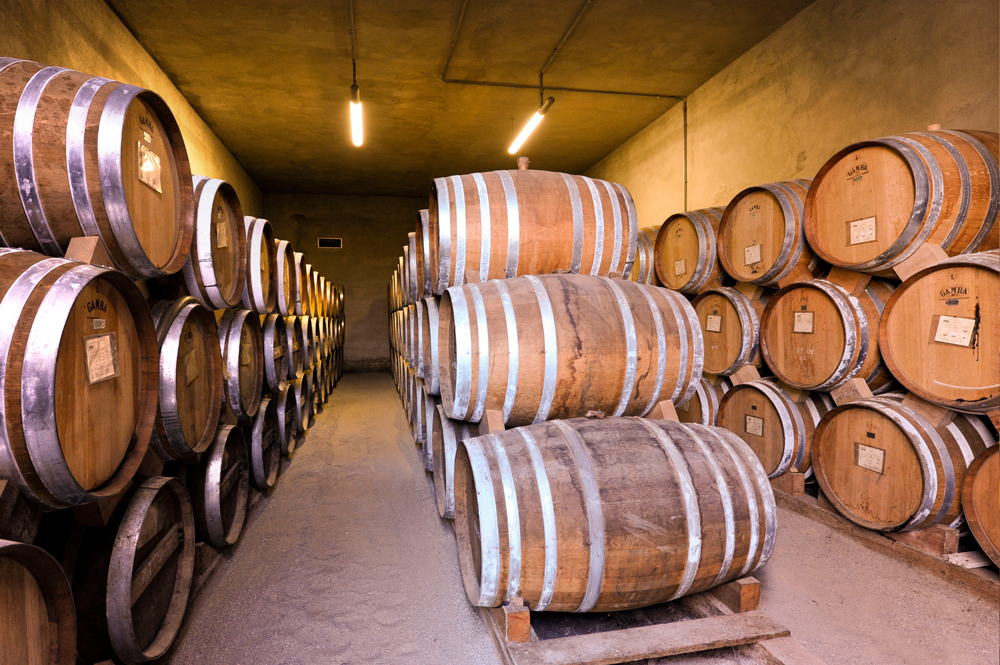 Through which distribution channels are the products marketed? Where are they available in Germany?

Unfortunately, I still have very few customers in Germany who sell my brandies. One customer who sells products online is Stefania Canali.

You also work with True Spirits in Germany. How exactly?

Michael’s words convinced me immediately: For a small distillery like Villa Zarri, True Spirits is an ideal partner to find importers and distributors for my products in countries where I am not present. By the way, here is the Villa Zarri page on the portal. 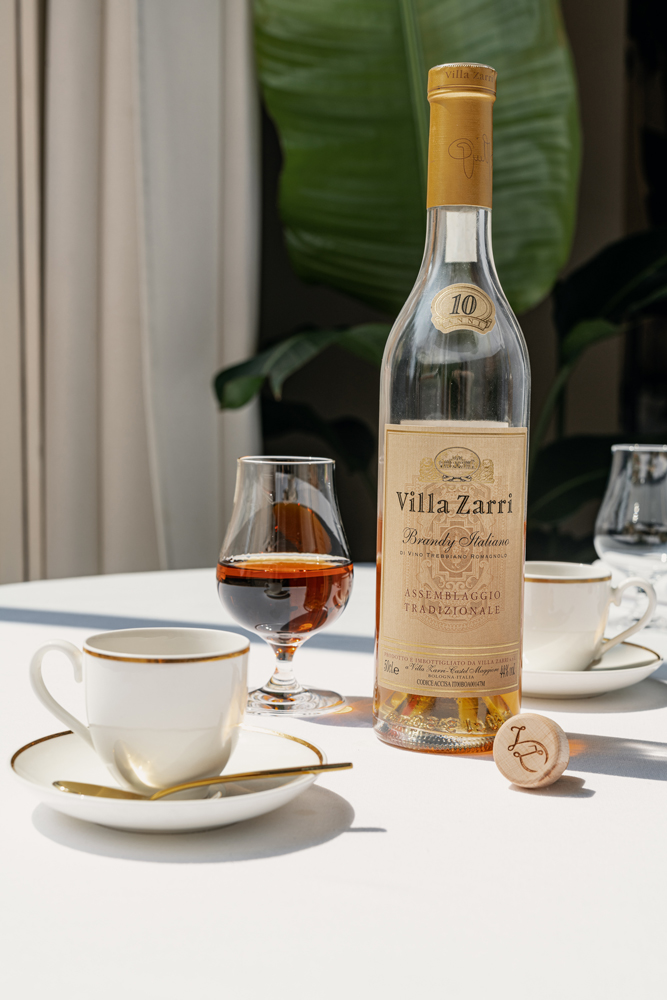 What is the best way to enjoy your products?

Guido Fini Zarri: Brandy is a product to be consumed after a meal. It should be consumed at a temperature of 18/20 degrees, no more. Therefore, in summer, if it is very hot, it is advisable to cool the bottle a little before pouring the brandy into the glass. As a glass I recommend the tulip-shaped one, or a wine glass large enough to favor the oxygenation process of the brandy in the glass.

As a pairing, our brandies go perfectly with many things, starting with dark chocolate, with desserts based on dried fruit such as walnuts and hazelnuts, but also with blue or in any case aged cheeses. Smoked products also pair well with brandy, starting with salmon.

+++ We would like to thank Guido Fini Zarri for the open and very interesting interview and wish him continued success! If you also have an interesting brand, then we should talk. Just send us an email with the subject “about-drinks interview” to redaktion@about-drinks.com – we look forward to hearing from you! +++