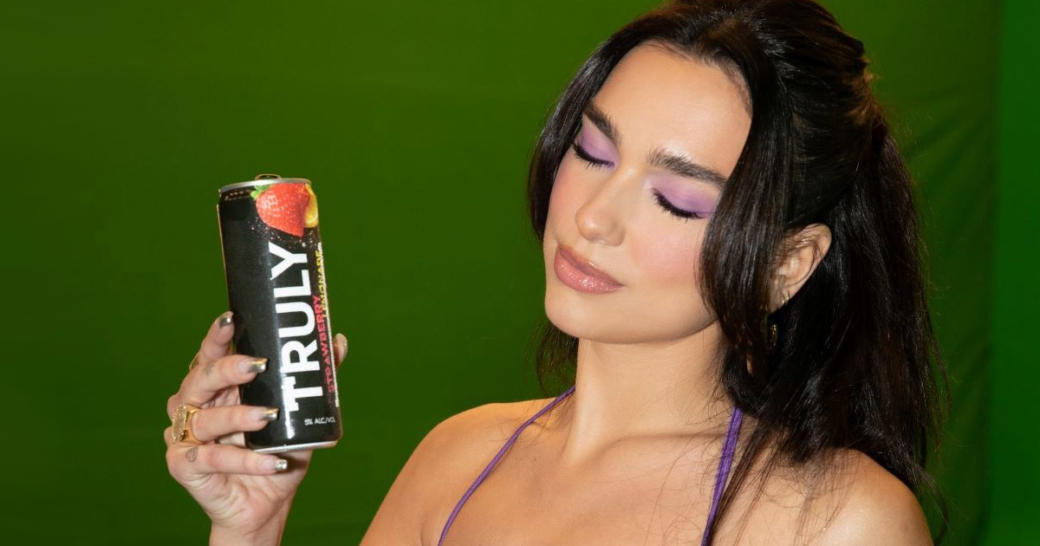 Today, Truly Hard Seltzer, the fastest growing brand in the hard seltzer category, launched ‘Truly Inspired’, a summer virtual concert series, co-created and produced by Live Nation, featuring artists curated by Grammy Award Winner and global pop icon, Dua Lipa. As the latest installment of the brand’s No One Is Just One Flavor campaign, ‘Truly Inspired’ shines a light on the dynamic artists driving Dua’s inspiration in music and art that also reflect the individuality within the world of exploration and variety that Truly drinkers crave.

Dua selected three acts to join her in the ‘Truly Inspired’ series including American hip-hop duo EARTHGANG, Irish singer-songwriter and musician Dermot Kennedy, and Korean-American singer, DJ, and producer Yaeji. In addition to the concert series, which will stream on the Live Nation Channel on Twitch, fans can also look forward to one-on-one conversations between Dua and each of the artists, giving viewers a chance to see these stars connect and explore their craft, creative outlets, and what inspires them.

“Truly has given me a special opportunity to share with the world some of the artists I love most by empowering me to curate a virtual concert series full of acts that inspire me personally,” said Dua Lipa. “Each of these artists represents an individual perspective, a distinctive part of the world, an original corner of music, and they all inspire me uniquely. In addition to the performances, I will be sitting down with each artist, and together we’ll chat, have some fun and maybe even have a couple of drinks as we explore how No One Is Just One Flavor.”

Truly’s drinkers seek flavor and variety in all that they experience – they are adventurous from their taste in beverages to their taste in music. “Our drinkers are avid learners, fearless explorers, music lovers, and always on the forefront of what’s new,” said Boston Beer Company CMO, Lesya Lysyj. “Truly Inspired gives life and sound to the message that No One is Just One Flavor by celebrating the different artists that are inspiring one of the most influential artists in music.”

The brand’s relationship with Dua Lipa includes her appearance in Truly’s TV spot, as well as social, digital, out-of-home, and point-of-sale, where Truly drinkers will have a chance to win more than $1 million in concert prizes, including VIP experiences to meet the pop star and attend a performance this Fall.

Since its inception in 2016, Truly has been the most innovative brand in the category, breaking the boundaries of what consumers expect from hard seltzer. Truly believes no one is just one flavor, which is why it is available in 27 total flavors: 12 delicious original flavors, plus five flavors of Truly Lemonade, four flavors of Truly Iced Tea, four flavors of Truly Punch, and two flavors of Truly Extra. At just 100 calories and 5% ABV, Truly is perfect for any occasion from beach days to backyard barbecues and beyond. To learn more about Truly, visit www.trulyhardseltzer.com.

Global pop superstar Dua Lipa firmly solidified her position as both a critical success and top radio performer when she released her Grammy award-winning #1 UK sophomore album Future Nostalgia in 2020 to worldwide acclaim. The album was the follow up to her eponymous 2017 debut, which is certified platinum, spawned 6 platinum tracks, and made Dua the first female artist in Brit Awards history to pick up five nominations, with two wins for British Breakthrough Act and British Female Solo Artist. Future Nostalgia landed on the year-end “Best Of” lists of everyone from Rolling Stone and Billboard, to the New York Times and Pitchfork.

It is certified platinum in the US & UK and spawned multiple worldwide hit singles including the #1 hits “Break My Heart,” “Levitating” which is still topping the charts and is the longest running song ever on Spotify’s Today’s Top Hits playlist, and US 4x platinum lead single “Don’t Start Now,” which broke her personal best record of weeks at #1 at US Top 40 radio. In addition to breaking radio records, Dua is also a dominate force on streaming platforms, topping Spotify’s artist chart as the most streamed female artist on the platform and is currently the fourth biggest artist overall with over 65 million monthly listeners. Future Nostalgia now has over 7 billion streams across all platforms worldwide. Dua received 6 nominations at the 2021 Grammys, including Record, Song and Album of the Year. She is now a three-time Grammy winner, having received awards for Best Pop Vocal Album this year and for Best New Artist and Best Dance Recording in 2019.