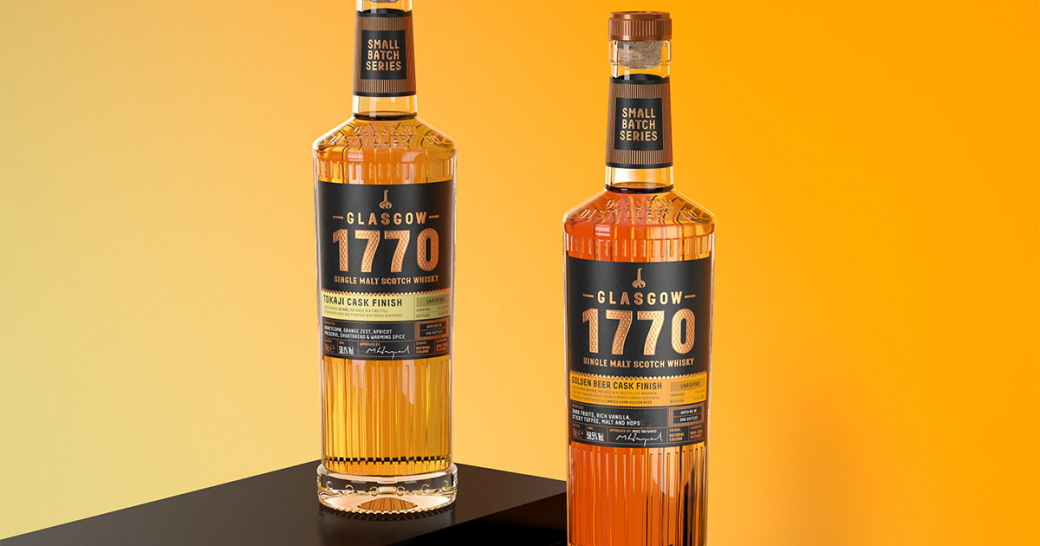 The Glasgow Distillery has stepped up to meet increasing demand for its ‘Small Batch Series’, debuting two new limited edition expressions of its Glasgow 1770 Single Malt Scotch Whisky. Following on from the sell out success of its previous two small batch releases which launched earlier this year, The Glasgow 1770 Innis & Gunn Golden Beer Cask Finish and Glasgow 1770 Tokaji Cask Finish are now available and have both been produced in the distillery’s unpeated single malt style.

Continuing its focus on flavour experimentation, this is the first time The Glasgow Distillery has stepped into the world of beer finishing. The Glasgow 1770 Golden Beer Cask Finish has been matured in first fill ex-bourbon cask and has been finished in a Pedro Ximénez sherry hogshead which was previously used to mature Innis & Gunn’s Original Beer for three months. The result is a rich, sherry influenced whisky with notes of dark fruits, sticky toffee and rich vanilla, with a dry and hoppy finish, with only 356 bottles available at 58.5% ABV.

The Glasgow 1770 Tokaji Cask Finish spent two and a half years in a bourbon cask before being moved to a Hungarian Tokaji cask for over 18 months, where it develops into a rich, punchy, sweet and fruity single malt with notes of vanilla ice cream and apricot jam. 210 bottles are available at 58.1% ABV.

Mike Hayward, Co-Founder of The Glasgow Distillery, said: “Moving into beer cask finishing for the first time demonstrates our commitment to cask experimentation and flavour trialling. Innis & Gunn is traditionally a beer finished in whisky casks, so our Golden Beer Cask Finish brings the premise full circle, creating a deliciously golden and hoppy whisky, with deep sherried undertones. We are always prepared to take risks and push boundaries to create something different for our consumers, and we hope these two bottlings are as well-received as their predecessors.” 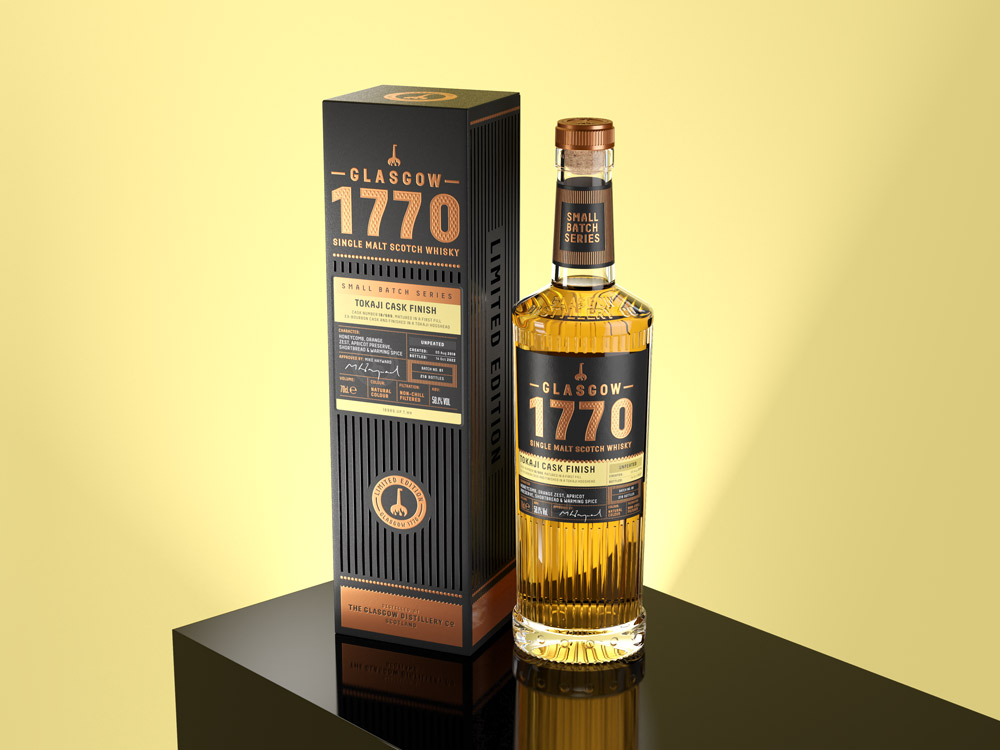 Priced at an of RRP £59 per 70cl bottle, the limited edition bottles will be available from the distillery website and at a selection of specialist retailers for UK customers from Wednesday the 7th December. The Golden Beer Cask Finish release is available from the Innis & Gunn Taproom in Glasgow’s Ashton Lane where it can be tried alongside the limited edition beer that preceded it within the cask.

As with the two previous small batch releases, The Glasgow 1770 Tequila Cask Finish and Cognac Cask Finish, the two new additions will retain the Glasgow 1770 industrial bottle style whilst adopting brighter colourways in their labelling and design to reflect the flavour profiles of each whisky.

Demonstrating the collaboration that lies at the heart of The Glasgow Distillery’s craft and that has been influential in the creation of this new Small Batch Series, each bottle features the signature of the member of the whisky making team that has led on each particular project, showcasing The Glasgow Distillery’s non-traditional approach to the ‘master blender’ role, instead opting to collaborate on the whisky creation process as a team.

The new limited editions follow on from the brands decision to move its Signature Range from 50cl bottles to 70cl, at no extra cost for the consumer as Glasgow 1770 increases its global presence. 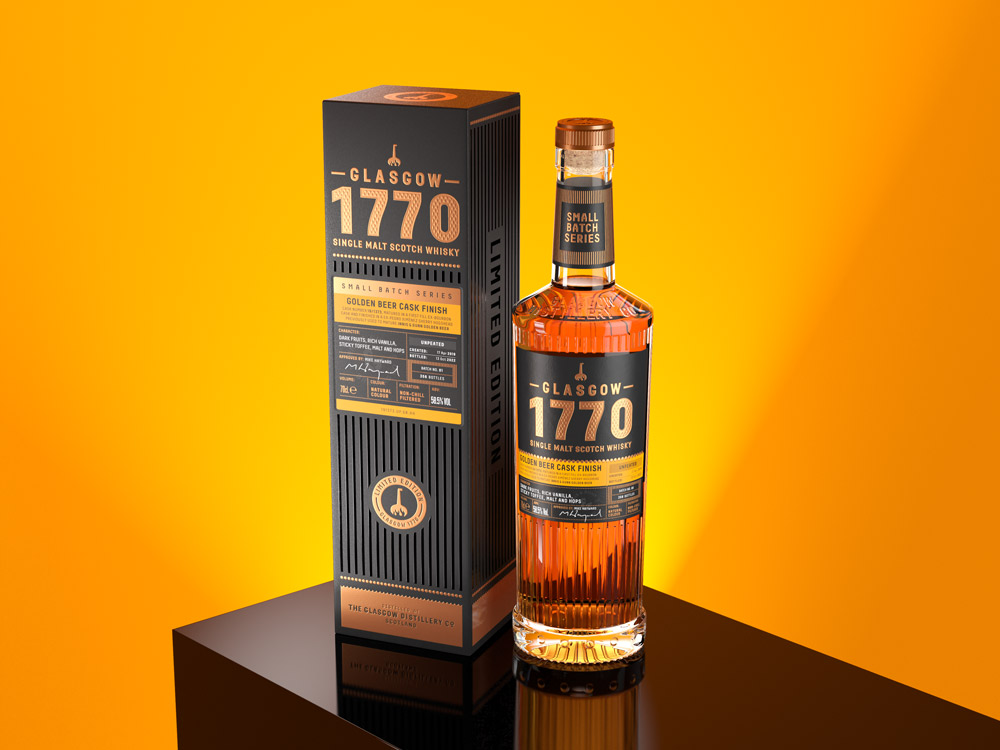 The two limited edition expressions are available at:

Glasgow 1770 is The Glasgow Distillery’s signature single malt and demonstrates commitment to authenticity and quality, realising their mission as contemporary urban distillers. Honouring the heritage of single malt distilling in Glasgow by using the date 1770, paying homage to the original foundation of Glasgow Distillery, before its closure in 1902. Proudly handcrafted in their special copper pot stills, christened: Tara, Mhairi, Margaret and Frances, Glasgow 1770 Single Malt Scotch Whiskies combine barley and the exceptionally pure water of Loch Katrine to create the finest spirit. Matured in hand-selected casks, always non-chill filtered and only ever natural in colour, the Glasgow 1770 Signature Range consists of: The Original, Peated and Triple Distilled; three single malts of sublime quality that have successfully brought single malt whisky back to the city of Glasgow.

Peated and The Original were both awarded gold at The Scotch Whisky Awards in 2020 and 2021 as well as Triple Distilled recently winning gold at International Wine & Spirits Competition. The full range has been named ‘Best Lowland Single Malt’ consecutively for the past four years at the International Whisky Competition.

About The Glasgow Distillery:

The Glasgow Distillery Company was established in 2012, marking the creation of Glasgow’s first independent single malt whisky distillery since 1902, with an unwavering mission to bring single malt distilling back to the city. The company produces an award-winning portfolio of brands, each inspired by the city’s rich past, including: