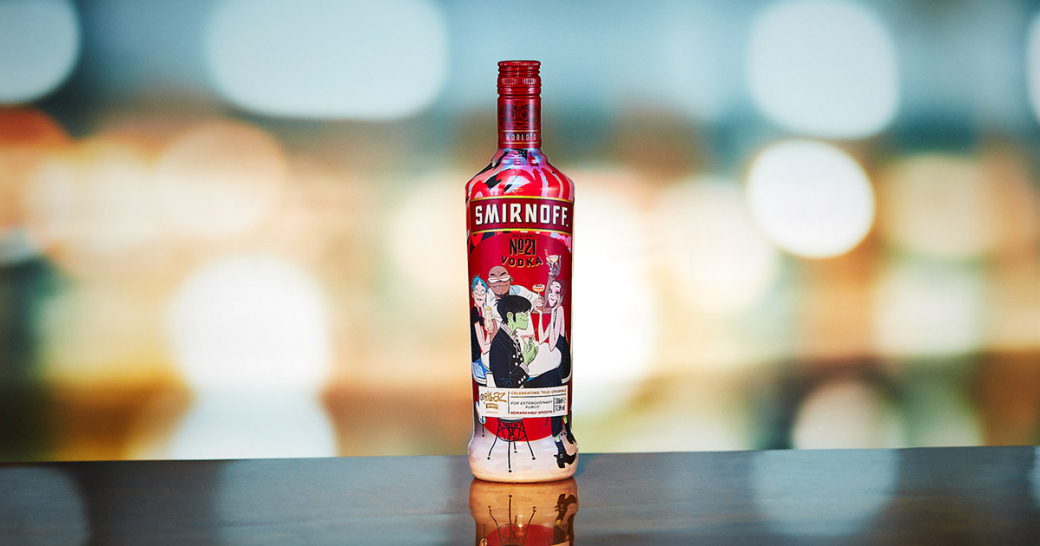 Since 1864, Smirnoff has introduced some of the most iconic and widely replicated cocktails into our collective cultural drinks cabinet, from the vodka martini that took America by storm to the creation of Brit favourite the Bloody Mary. Smirnoff, bold and inventive as ever, is celebrating their historic disruption in cocktail culture via ‘True Originals’ by handing over some of their best-known cocktails and No. 21 bottle to be reimagined by musical originators Gorillaz this autumn. Created by musician Damon Albarn and artist Jamie Hewlett, Gorillaz brought a never-before-seen immersive and creative approach to music.

The release of their eponymous debut album in 2001 saw 2D, Murdoc Niccals, Russel Hobbs and guitar prodigy Noodle burst onto the global stage following a collision of mishaps, meetings and pure luck to blow up a pre-digital world with their colourful backstory and ground-breaking virtual ways to become a truly global cultural phenomenon.

This collaboration, a testament to the endless possibilities that arise from embracing the power of distinctiveness, begins with each of the four band members creating their own personal twist on some classic cocktails made famous by Smirnoff. From Murdoc’s Vodka Murdini (a spin on the classic vodka martini) to Russel’s Smirnoff Brooklyn (paying homage to the vodka Manhattan and his love for chilli), each one of the band’s signature recipes will feature on the exclusive limited edition Smirnoff x Gorillaz bottle.

Commenting on the collaboration, Murdoc said “Nothing to see here folks — just the OG vodka brand teaming up with the OG virtual band. Cheers Smirnoff — pleasure doing business with you! I’m not usually one for labels, but this is a beauty!”

“Smirnoff is built on the spirit of originality and individuality in all forms; Gorillaz are true originals who dare to push the boundaries in everything they do. We are thrilled to be working with the band to continue creating originality and disrupting the creativity of cocktails.” Mark Jarman, Head of Smirnoff GB.

As you would expect from the two originators, the partnership will also see a truly original experience to come later in the year.

To get your hands on this one-off bottle, head over to Amazon from 27th October 2022. And to those who aren’t fortunate enough to nab a bottle in time, don’t forget to bookmark the Smirnoff x Gorillaz cocktail recipes, to recreate a truly original moment from the comfort of your own home. 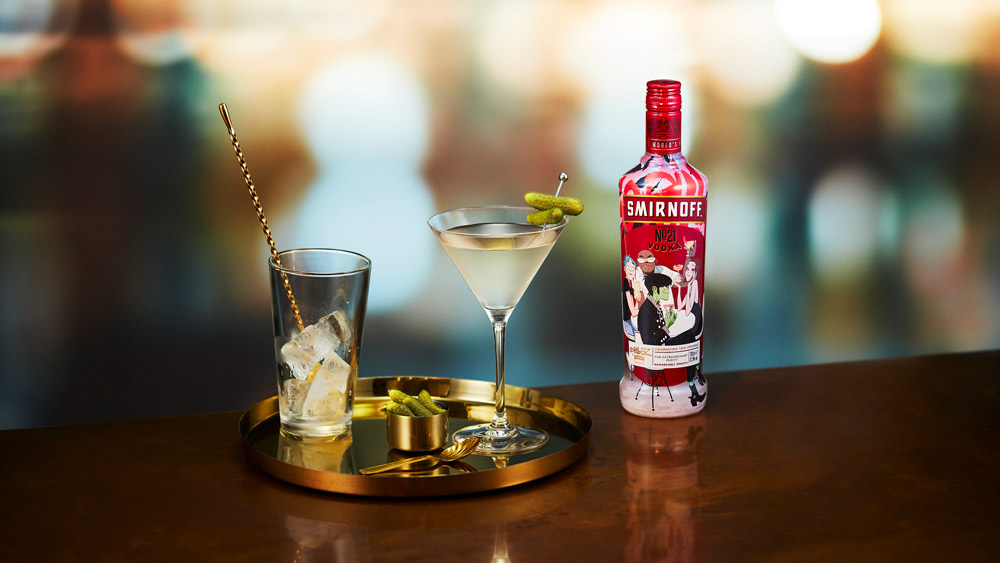 Until smooth Smirnoff Vodka came along, nobody had tried using vodka in a martini. In the 1950s, Smirnoff led a cocktail disruption across America by replacing gin in this classic serve and now millions of martini fans mix with Smirnoff Vodka instead of gin.

Murdoc Niccals is affectionately regarded by the Gorillaz fandom community as Pickle (owing to his green skin) and we wouldn’t put it past him to consider himself the ideal candidate for the next Bond, so it was a no brainer to take the shaken-not-stirred classic and whack a pickle in it… Hold the olive. 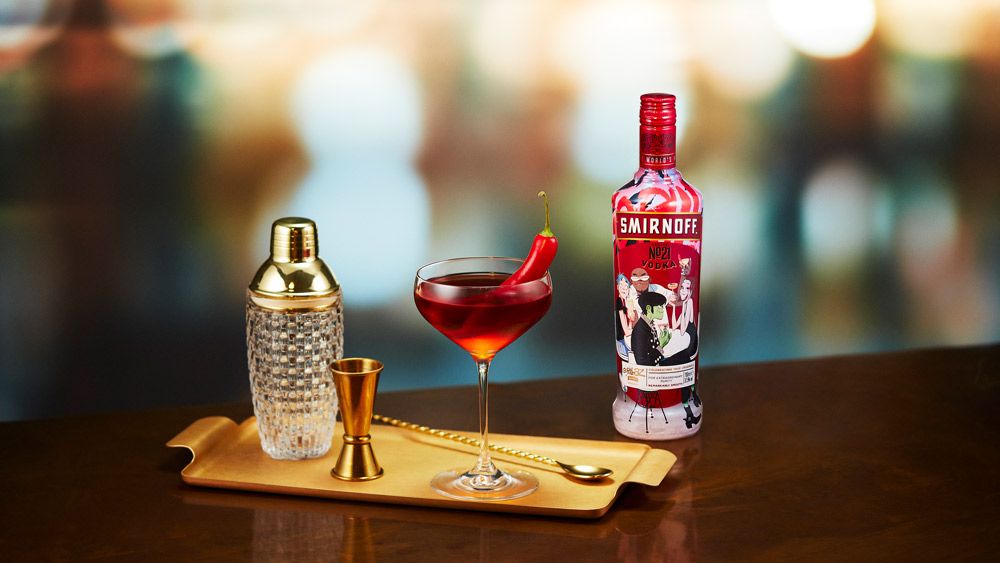 Named after a New York City Borough and dating back in 1864, the Manhattan was originally enjoyed with whiskey. Fast forward seven decades along comes Smirnoff in the 1930s opening up a new world of flavours for Manhattan lovers and enthusiasts, with vodka rapidly becoming the perfect ally to vermouths and bitters.

Russel Hobbs is from Brooklyn — straight up (no ice). Whilst the modern Manhattan sits on the darker side, Hobbs is here to lighten things up with a twist on the OG Smirnoff Vodka original recipe. He doesn’t farm chilli peppers for nothing: he’s turning up the heat with a chilli twist… Hold the cherry. 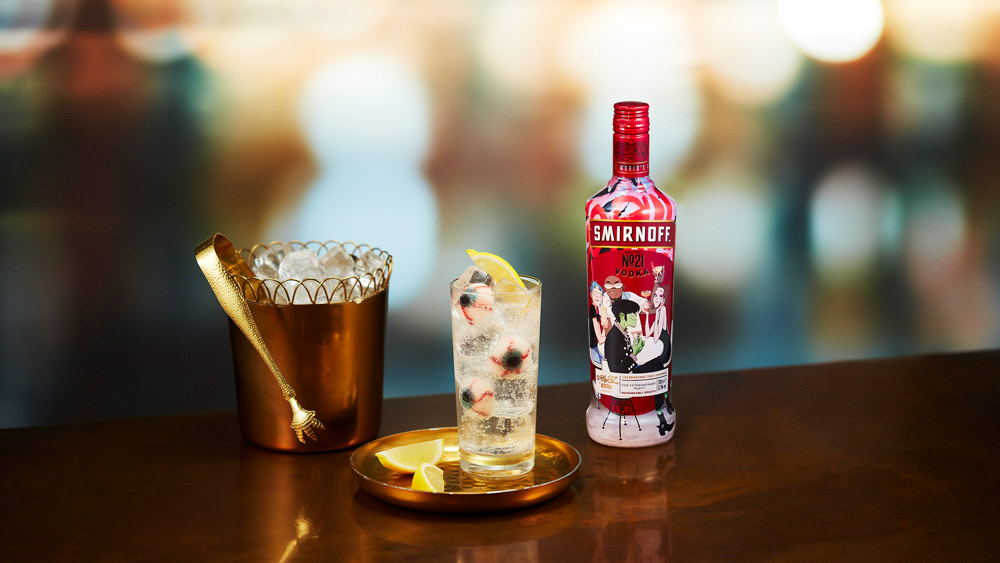 Like the other iconic cocktails made famous by Smirnoff, the highball has a long history dating back to the 1890s but it wasn’t until 1950s that Smirnoff mixologists swapped out the usual brandy or whiskey for their iconic ultra smooth blend — the rest is history!

2D famously has a pair of eyes that (for reasons unknown) go from black to white, and he keeps a pet satsuma. Meet: the Eyeball. He still doesn’t know it’s actually called highball, hence the gummy eye garnish… 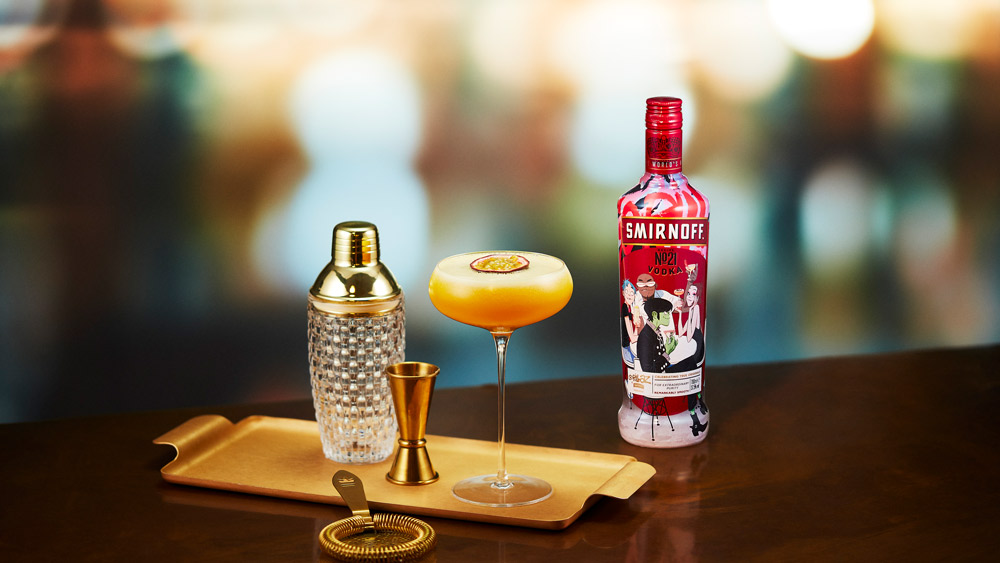 This modern classic has become a UK favourite in the last several years with Smirnoff being part of its revolution since 2008. The delicious combination of passion fruit, vanilla and lime flavours burst through the smoothness of Smirnoff Vodka – a cocktail that was truly made for flavour first.

Wave goodbye to bad vibes and demons alike. Enter passionfruit and welcome echoes of a childhood in Japan with yuzu sake. A delicate touch of vanilla completes Noodle’s Sayonara Martini.

Please drink responsibly and please do not forward to anyone under the legal purchase age.

SMIRNOFF is the number one vodka brand globally, owned by Diageo, a British company. Smirnoff is made in the USA, Canada, Great Britain, Italy, Australia, Jamaica, Brazil, Argentina, India, South Korea, Indonesia and Kenya. As the number one international-origin spirits brand, Smirnoff has always been known for quality and is enjoyed responsibly in 130 countries around the world. For more information, log on to www.smirnoff.com

Diageo is a global leader in beverage alcohol with an outstanding collection of brands across spirits and beer categories. These brands include Johnnie Walker, Crown Royal, JεB and Buchanan’s whiskies, Smirnoff, Cîroc and Ketel One vodkas, Captain Morgan, Baileys, Don Julio, Tanqueray and Guinness.

Diageo is a global company, and our products are sold in more than 180 countries around the world. The company is listed on both the London Stock Exchange (DGE) and the New York Stock Exchange (DEO). For more information about Diageo, our people, our brands and performance, visit us at www.diageo.com. Visit Diageo’s global responsible drinking resource, www.DRINKiQ.com, for information, initiatives and ways to share best practice.
Celebrating life, every day, everywhere.

Created by musician Damon Albarn and artist Jamie Hewlett, Gorillaz is singer 2D, bassist Murdoc Niccals, drummer Russel Hobbs and Japanese guitar prodigy Noodle. The BRIT and Grammy-winning virtual band formed following a collision of mishaps, meetings and pure luck to blow up a pre-digital world with their colourful backstory and ground-breaking virtual ways. Based at Kong Studios in West London, Gorillaz settled into a life of musical innovation with an eye-wateringly exciting roster of collaborators, a list that includes musical legends, geniuses and future stars from Elton John to Little Simz, MF Doom to Jean-Michel Jarre, Grace Jones to slowthai, Kali Uchis to Sidiki Diabaté, plus so many more. With seven albums to their name, Gorillaz (2001), Demon Days (2005), Plastic Beach (2010), The Fall (2011), Humanz (2017), The Now Now (2018) and Song Machine: Season One – Strange Timez (2020), Gorillaz is a truly global phenomenon, achieving success in entirely new and unique ways, touring the world from San Diego to Syria, Montevideo to Manchester and winning numerous awards including the coveted Jim Henson Creativity Honor.

Cracker Island, the eighth studio album from Gorillaz, is coming on 24th February 2023. An energetic, upbeat, genre-expansive collection of 10 tracks, yet another stellar line up of artist collaborators. Lead track ‘Cracker Island ft. Thundercat’ is out now.