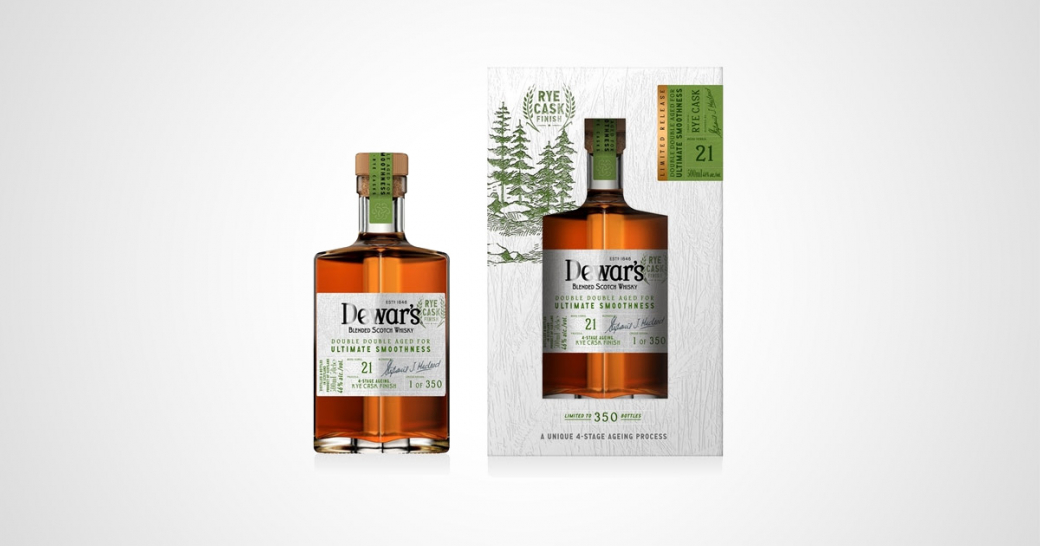 This latest innovation from DEWAR’S is a one-off in the award-winning Double Double series, with the liquid finished in an active rye cask for the first time. This is a limited release of only 50 bottles available for public purchase.

BlockBar democratizes access to luxury wine and spirits whilst offering bottle owners storage, insurance and a marketplace to resell their bottles. Upon purchase of this rare, small batch premium blend of DEWAR’S Double Double 21 Year-Old Rye Cask Finish, the physical version will be held securely by BlockBar, with a record of authenticity held on the blockchain as a digital certificate of ownership. The bottle owner may ‘burn the NFT’ to redeem the physical bottle and have it delivered from BlockBar’s secure storage facility, resell it on the BlockBar.com marketplace, gift it or showcase it in their virtual bar.

Each bottle owner of this drop will be invited to an exclusive virtual whisky tasting with DEWAR’S award-winning master blender, Stephanie Macleod.

“DEWAR’S Double Double Series has already won multiple accolades in the whisky world, including World’s Best Whisky, and was born out of a desire to create ultimate smoothness. It was curiosity and inventiveness that led us to the four-step aging process and has led us to new ways for consumers to experience our brand. This time it’s in the form of an NFT, redeemable for an exclusive blend – DEWAR’S Double Double 21 Year-Old Rye Cask Finish – which we are sure will delight a new audience of NFT collectors and whisky connoisseurs alike.” said Stephanie Macleod, DEWAR’S Master Blender.[2]

“We are delighted that DEWAR’S has chosen to drop their inaugural NFT on BlockBar.com,” commented Dov Falic, co-founder and CEO of BlockBar. “We look forward to offering the DEWAR’S community and ours not only this exclusive release, but storage, insurance and a marketplace for reselling this release.”

Only 50 bottles will be made available for public purchase from a total allocation[3] of 350, with the remaining bottles gifted to employees.

50 bottles of DEWAR’S Double Double 21 Year-Old Rye Cask Finish will drop exclusively on BlockBar.com, at 10AM EST on Tuesday 8th November 2022. Priced at $150 USD, the NFTs will be available to purchase with ETH and credit card and customers will have 10 minutes to check out. Users who successfully check out will receive an NFT representing the physical bottle, which is stored with BlockBar until the bottle owner is ready to redeem. 24 hours early access will be granted to BlockBar NFT holders.

Founded in 1846 by John Dewar, DEWAR’S has grown from a small wine and spirits merchant shop in Scotland, to one of the largest Scotch whisky brands in the world. Best known for its iconic DEWAR’S WHITE LABEL, it has expanded its family to create a portfolio of premium and super premium whiskies including DEWAR’S 12-Year-Old, DEWAR’S 15-Year-Old, DEWAR’S 18-Year-Old, DEWAR’S Double Double Series, DEWAR’S Caribbean Smooth and the exclusive DEWAR’S 25.

These whiskies are crafted using the DEWAR’S oak marrying ageing process, which involves returning the hand-crafted blend to vintage oak casks for further maturation. The result is a smoother taste with a long, lingering finish; a taste that wins medals and applause, making DEWAR’S the world’s most awarded blended Scotch. The DEWAR’S brand is part of the portfolio of Bacardi Limited, headquartered in Hamilton, Bermuda. Bacardi Limited refers to the Bacardi group of companies, including Bacardi International Limited.

Founded in October 2021, BlockBar sells NFTs directly from luxury wines and spirits brands. Each NFT corresponds to an actual physical bottle, exclusive to BlockBar, available to purchase with ETH, credit card or wire transfer. Owners can resell, collect, gift, or at any point «burn» their NFT in exchange for the physical bottle, shipped from BlockBar’s secure facility in Singapore with 24/7 security, motion sensors, and temperature control. BlockBar only partners directly with brand owners including LVMH, Diageo, Bacardi, Pernod Ricard, Sazerac, William Grant & Sons and more, and does not take collections from third parties or collectors.

BlockBar is democratising access to luxury wines and spirits allowing anyone, anywhere in the world to participate, whilst offering bottle owners storage, insurance and a marketplace to re-sell their bottles purchased on BlockBar’s platform. BlockBar’s proprietary smart contracts verify authenticity tracing every transaction directly back to the partnering brand, and its partnership with top cyber- and crypto-security firms ensures that transactions are fully protected and transparent.