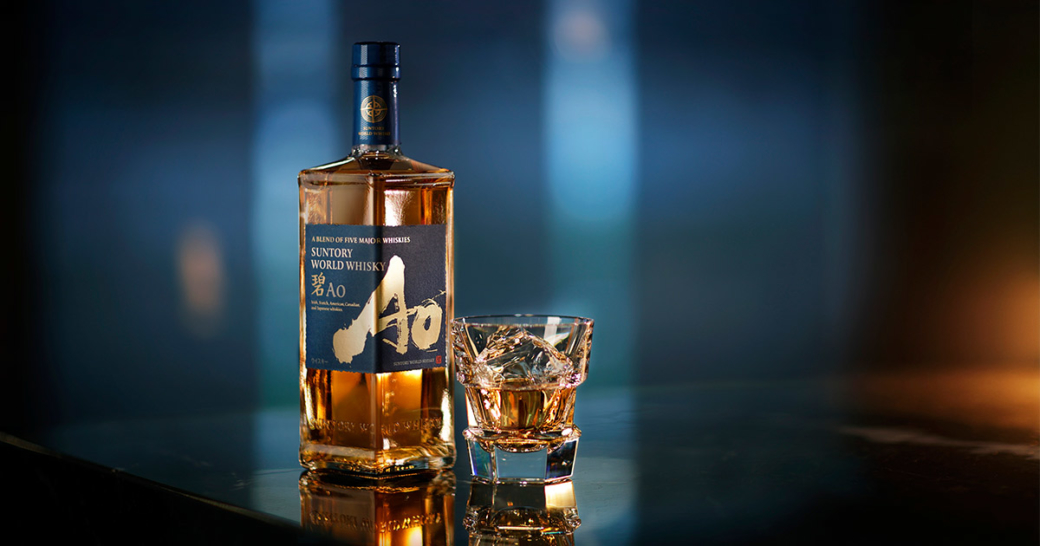 The whisky, which will be available in 16 markets, is the first innovative whisky launch in global travel retail since the coronavirus pandemic began.

Blended using whisky from five of the most renowned distilleries in Japan, Scotland, Ireland, Canada and the US, ‘Ao’, meaning blue, is named after the ocean that connects these five distilleries together in harmony.

The one-of-a-kind whisky is a tribute to the liquids’ long history, perfectly capturing the heathery flavour of Ardmore and Glen Garioch, the complexity of Cooley, the smoothness of Alberta, the vibrance of Jim Beam and the subtlety of Yamazaki and Hakushu. With notes of vanilla, tropical fruit and cinnamon, it is the distinctive climate, fermentation and distillation processes in each whisky-making region that give the whisky its unique taste.

Shinji Fukuyo said: “Ao is an exceptional whisky which, through the art of Suntory blending, allows you to enjoy the unique characteristics of each of the five major whisky-making regions.”

Sho Semba, Head of Suntory Spirits, said: “We are very excited about the launch of this new whisky. Suntory World Whisky ‘Ao’ brings together the world’s most highly regarded whisky regions to produce this unique and premium quality blend.

“In recent years we’ve seen a huge increase in demand from customers across the world who want to experience Japanese whisky. We are confident that whisky enthusiasts will enjoy the unique flavour created by this unique Japanese blended whisky, which originates from around the world.”

Ed Stening, Global Head of Travel Retail Marketing at Beam Suntory International, said: “This is a truly innovative whisky that blends five very different distilleries’ greatest assets and unique crafts. We couldn’t be more excited to share ‘Ao’ with our customers and bring some exciting innovation to the global travel retail world.”

Beam Suntory was created in 2014 by combining the world leader in bourbon and the pioneer in Japanese whisky to form a new company with a deep heritage, passion for quality, innovative spirit and a vision of Growing for Good. Headquartered in Chicago, Illinois, Beam Suntory is a subsidiary of Suntory Holdings Limited of Japan. For more information on Beam Suntory, its brands, and its commitment to social responsibility, please visit www.beamsuntory.com and www.drinksmart.com.

About House of Suntory:

Since 1923, Suntory has been renowned as the pioneer of Japanese whisky for its House of Master Blenders and for their Art of Blending. The founding father of Japanese whisky Shinjiro Torii, built Japan’s first malt whisky distillery in Yamazaki, and the Suntory legacy continued with Torii’s son, Keizo Saji, Suntory’s second master blender who continued to establish distilleries including the Hakushu distillery. As the generations of Suntory’s master blenders carry on, Suntory Whisky remains committed to heritage and innovation. The House of Suntory Whisky has been named four-time Distiller of the Year at the International Spirits Challenge in London, UK (2010, 2012, 2013, 2014).

Suntory Group is among the world’s leading consumer products companies, with an annual revenue (excluding excise taxes) of $19.2 billion. We offer a uniquely diverse portfolio of beverage products enjoyed by millions around the world: from award-winning Japanese whiskies Yamazaki and Hibiki, The Premium Malt’s beer, and iconic American spirits Jim Beam and Maker’s Mark to non-alcoholic favorites Orangina, Lucozade, Ribena, TEA plus, BOSS coffee, Iyemon tea, and Suntory Tennensui water. Suntory also produces wellness products and operates a flower business. Founded as a family-owned business in 1899 in Osaka, Japan, Suntory Group has grown into a multi-national corporation, with operations throughout the Americas, Europe, Asia and Oceania. We are driven by Yatte Minahare – the spirit of bold ambition – and our 37,745 employees worldwide draw upon our unique blend of Japanese artisanship and global tastes to explore new product categories and markets. Suntory Group is committed to our founding promise to coexist with people and nature: protecting water resources, nurturing our communities and fostering the arts. Suntory believes we grow for good together when we stay true to ourselves and pursue the paths that nature intended.