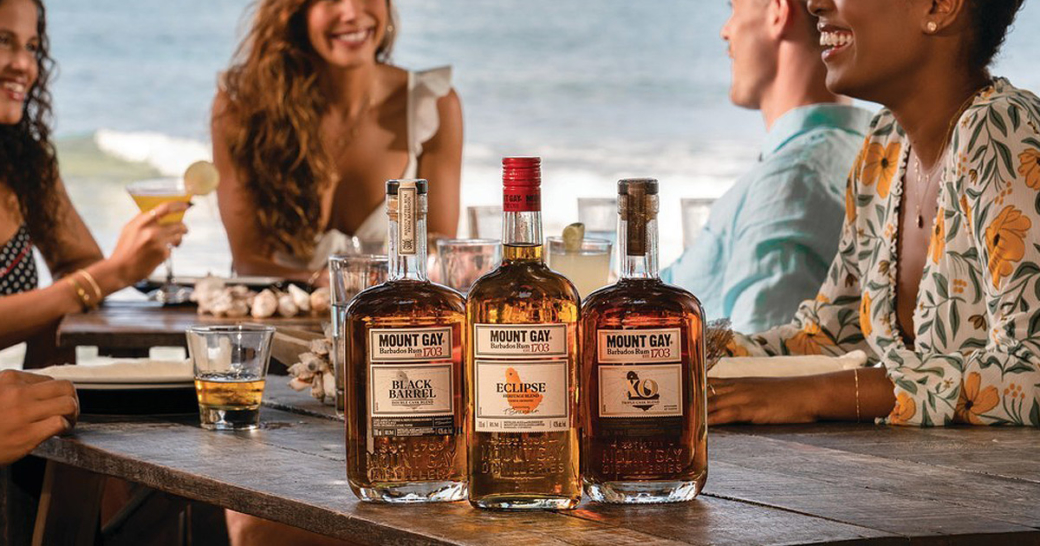 Mount Gay, the world’s oldest running rum distillery dating back to 1703, announces a new partnership with 4ocean, one of the world’s leading ocean conservation companies, to support them in their mission to help end the ocean plastic crisis.

Mount Gay, over its 300-year heritage, has always been deeply connected to the ocean. From its island roots in Barbados, the birthplace of rum, to the tropical climate that influences each bottle of rum and the longstanding connection to sailing, Mount Gay’s history, craftsmanship and community are truly united by the ocean. Through this partnership, Mount Gay is committing to help protect and sustain this invaluable asset.

Billions of pounds of plastic enter the ocean each year, with more than 80% of marine debris coming from land-based sources. This June, throughout World Ocean Month, Mount Gay will commit $5 for every bottle and $1 for every cocktail sold, up to the value of $100,000 to 4ocean’s Pound+ Program. This contribution will directly fund the removal of tens of thousands of pounds of trash from the ocean using 4ocean’s full-time, professional cleanup crew members around the world.

“Our premium rums are heavily influenced by our roots in Barbados, from the coral filtered water to the ocean air imparted in our tropical ageing process. And as we are deeply ingrained in the sailing community, the ocean is at the center of experiences our clients enjoy,” said Ian McLernon, President and CEO Americas at Rémy Cointreau. “Protecting the ocean, one of the essential elements that unites Mount Gay and our community, is an important part of our partnership with 4ocean.”

Mount Gay is committed to the use of sustainable and transparent practices to meet the brand’s vision for environmental stewardship and carbon neutrality. As part of its multi-faceted sustainability program, Mount Gay has environmental, agricultural and community initiatives, with the goal to be employing 100% sustainable agriculture by 2025.

World Ocean Month is just the start of Mount Gay’s efforts supporting 4ocean’s mission to end plastic pollution. In August, Mount Gay and 4ocean will release an exclusive red bracelet, made from 100% post-consumer recycled materials, featuring a one-of-a-kind trident charm, which will support the Pound+ Program. Follow @mountgayrum for a chance to win one of the bracelets via sweepstakes.

“4ocean is proud to partner with a brand that shares our passion for ocean restoration while encouraging ocean-friendly, sustainable lifestyles. Through this collaboration, Mount Gay Rum will help us to reach our goal of removing over 20 million pounds of trash from the ocean, rivers, and coastlines by 2022,” said co-founder and CEO of 4ocean, Alex Schulze. “We believe that the actions of individual people and businesses, collectively, have the power to change the world and take us one step closer to ending the ocean plastic crisis for good.”

Starting June 1, 2021, in honor of World Ocean Month, purchase a bottle of Mount Gay Rum at select retailers and enjoy cocktails from participating accounts, with a portion of sales supporting this important initiative. Head to www.mountgayrum.com/4ocean/ to find retailers and bars taking part in this initiative.

Mount Gay is the world’s oldest running rum distillery established in 1703. Founded and still located in the Parish of St Lucy, at the northernmost tip of Barbados, Mount Gay is crafted using pure, coral-filtered water and the finest Barbadian and Caribbean molasses. Distilled in traditional double copper pot and copper column stills, Mount Gay rums are aged in a diverse selection of casks including American whiskey, Bourbon and Cognac. Harnessing over 300 years of heritage and expertise, Mount Gay rums are a fine balance between science, art and innovation. Blended by Master Blender Trudiann Branker and aged under the influence of Barbados’ tropical climate, our rums highlight a unique, rich and flavourful character. Mount Gay’s core range includes Mount Gay Silver, Mount Gay Eclipse, Mount Gay Black Barrel and Mount Gay XO alongside the annual limited editions 1703 Master Select and the Master Blender Collection. In addition to crafting the world’s oldest rum, Mount Gay is committed at all times to the use of sustainable and transparent practices in order to realise our vision of environmental stewardship and carbon neutrality.

4ocean is a purpose-driven business with a mission to help end the ocean plastic crisis by cleaning the ocean and coastlines while stopping the inflow of plastic by changing consumption habits on land. With the goal of creating an economy around cleaning the ocean, 4ocean funds its cleanup operations primarily through the sale of product purchases. Every product purchased funds the removal of one pound of trash from the ocean, pulling more than 14 million pounds to date. The solution to ending ocean plastic pollution lies in stopping it on land before it enters the ocean, which is why 4ocean is tackling behavior change by educating consumers about ways to reduce their single-use plastic consumption.