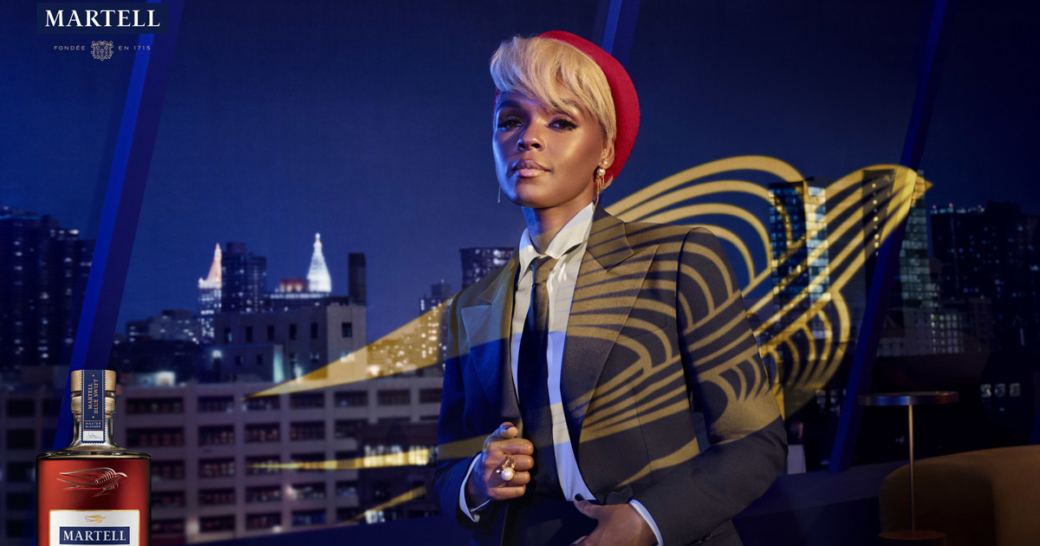 Martell, the oldest of the great cognac houses, is proud to announce world-renowned artist Janelle Monáe as an official partner for a new brand campaign, “Soar Beyond the Expected,” featuring the brand’s innovative offering, Martell Blue Swift.

Through content produced by director and artist, child., photographed by multimedia artist Jheyda McGarrell, and starring Monáe, the powerful women-led production – a rarity within a male dominated sector – recognizes “Standout Swifts” as those who live life on their own terms, approach their desires with unmatched passion and manifest their personal truths.

As the lead “Standout Swift,” Monáe will partner with Martell to inspire others to be unapologetically themselves and create their own path. This message is boldly brought to life in the creative: Monáe demonstrates that one’s path to success does not have to be linear and the campaign encourages people to seek out the opportunities in their lives that will help them both soar beyond expectations and drive positive change.

“It’s impossible not to be inspired by Janelle Monáe. She’s a boundary breaker, a risk-taker, a truth teller, and a person who truly lives life on her own terms. We couldn’t have found a better protagonist for the next chapter of Martell’s story than Janelle,” said Ann Mukherjee, Chairman and CEO of Pernod Ricard North America. “Consumers today want to support brands that share their values and are bold enough to believe that they can make a positive change in the world. With Janelle as our voice and our guide, Martell’s new campaign celebrates those who inspire others to live audaciously.”

Throughout the partnership, Monáe will also work in tandem with Martell to highlight and support philanthropic efforts that will further the reach of the “Standout Swift” mentality and drive change when and where possible.

“I have never been one who lives life trying to fit in. It isn’t always easy and can be lonely at times, but the reward of moving through life on your own terms is worth it. I have tried to use my platform to make a change in areas that I can be of service to while supporting those who are underrepresented,” says Monáe. “It is incredibly important that my partners not only support this line of thinking, but they mirror these values and give back to these communities that I care deeply about. In working with Martell and its ‘Soar Beyond the Expected’ campaign, I’m looking forward to opening new doors that will push our communities forward to soar even higher.”

Since Martell’s founding, the brand has been opening doors within the cognac category and pushing the boundaries of innovation, as embodied by Martell’s Blue Swift expression. As the first cognac house to ship its barrels to America in 1793, Martell Blue Swift is a celebration of the brand’s historic ties with the U.S., made of V.S.O.P cognac matured in French oak casks and finished in Kentucky bourbon barrels. This innovative expression is a first for the cognac category.

“Martell’s ‘Soar Beyond the Expected’ campaign marks an exciting new chapter for Martell and comes at a time when the cognac category is experiencing explosive growth,” said Pamela Forbus, CMO of Pernod Ricard North America. “Cognac is the second fastest growing spirits category in the U.S. and we’re confident Martell’s portfolio is perfectly poised to meet consumer demand.”

Martell encourages consumers to raise a toast to Monáe as an iconic “Standout Swift” who continues to redefine boundaries in art, music, and fashion with an inspired Martell Blue Swift cocktail:

The oldest of the great cognac houses, founded by Jean Martell in 1715, Maison Martell is renowned throughout the world for the finesse and elegance of its cognacs, the result of a legacy of savoir-faire handed down through nine generations. Together with a passion for its craft and a profound attachment to the terroir, Maison Martell is defined by the audacity with which it has pioneered new expressions – from the icon Martell Cordon Bleu in 1912 to the trailblazing Martell Blue Swift today.

Janelle Monáe is widely celebrated as an artist who defies genre – touching soul, R&B, rap, jazz and classical while making a sound of her own. She is a pop superstar with eight Grammy nominations and a globally successful career. Monáe co-founded her own label imprint, Wondaland Arts Society, which recently launched its production arm, Wondaland Pictures. As an actor, Monáe has stared in critically acclaimed films including Moonlight, Hidden Figures, Harriet, The Glorias, the television series Homecoming and most recently starred in the horror-film Antebellum. Monáe is currently in production for the highly anticipated sequel Knives Out 2.