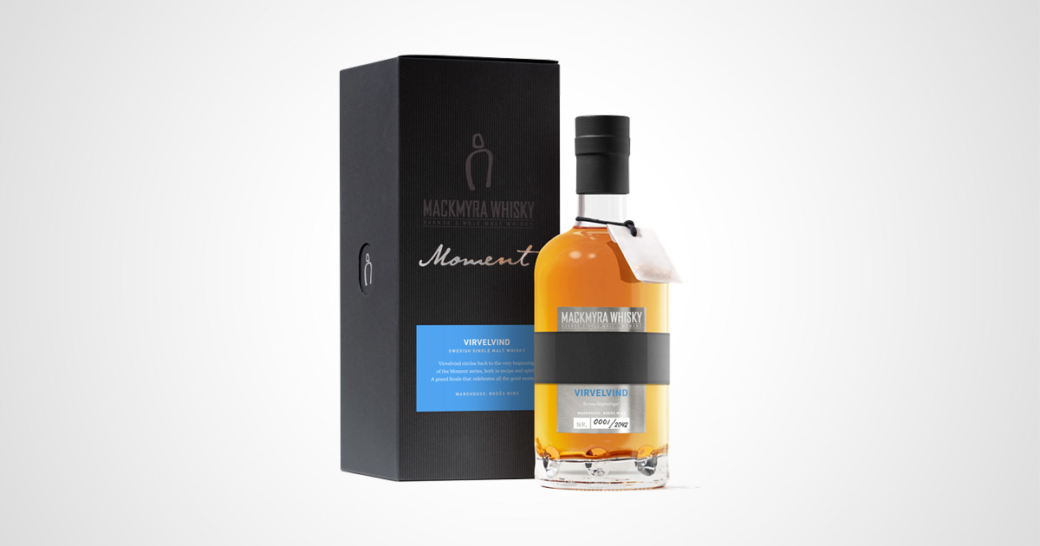 Moment Virvelvind is the last edition in the exclusive Moment series, where the unique cask have come into their own over the years in very limited editions. And to tie the knot, Moment Virvelvind has taken its inspiration from the first edition (Moment Medvind).

Moment Virvelvind is a single malt whisky that has been matured in the Bodås Mine since distillation at Mackmyra Bruk. The release is a swirling grand finale of Mackmyra’s Moment series and is available in limited edition from 25th of May.

The first issue (Moment Medvind) is the main inspiration for the 36th and final issue of the Moments series. Much has changed over the years and this will definitely be evident in Moment Virvelvind. The cask have been stored considerably longer than the original as they were all filled in 2007 and 2010. Virvelvind is a powerful conclusion to the Moment series and at the same time a steppingstone into an exciting future. A slightly smoky whisky with a Swedish oak in the palett. With classic ripe pears, red apples and fresh citrus. The whisky is Mackmyra typically complex and well balanced. Moment Virvelvind is between 12 – 14 years old. The colour is naturally golden with a hint of amber. Bottled in 2022 in only 2049 copies.

Meet people behind the craft and taste the whisky at the Harcourt for the world premiere of Moment Virvelvind from 5 pm, the 26th of May. Adress: 32 Harcourt St, London W1H 4HX, UK. More event info on Facebook.

Mackmyra is a pioneer and innovator that started the Swedish whisky odyssey. The whisky is created from Swedish ingredients, without any additives, using eco-friendly distillation technology. Mackmyra produces award-winning single malt whisky, provides exciting whisky experiences and allows customers to create their own personalised whisky with its individual 30-litre cask product. Mackmyra has also been creating organic gin since 2017. Welcome to Mackmyra.