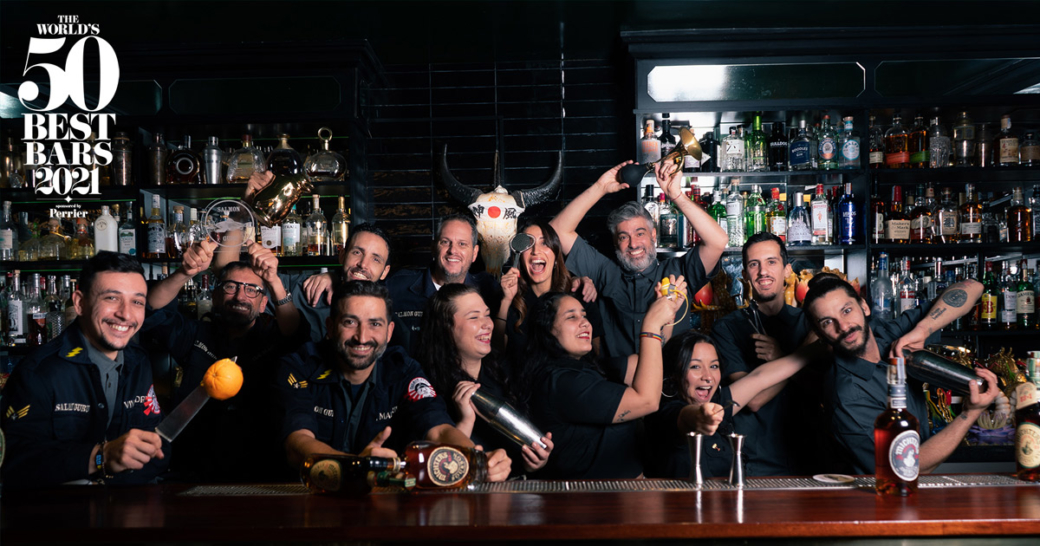 Salmon Guru, Madrid, has been announced as the winner of the Michter’s Art of Hospitality Award, part of The World’s 50 Best Bars awards 2021. Created to recognise the importance of hospitality in the bar experience, this award is voted for by over 600 members of The World’s 50 Best Bars Academy. These industry experts are asked to name the bar where they received the single-best hospitality experience during the voting period.

This is the first of a series of special pre-announced awards in the month leading up to the awards ceremony taking place at the Roundhouse in London, on 7th December 2021 at 8.30pm GMT. The World’s 50 Best Bars 2021, sponsored by Perrier, marks the return of the first in-person awards programme since 2019, representing an important milestone in the ongoing recovery of the bar sector.

Mark Sansom, Content Editor for The World’s 50 Best Bars, says: “We introduced the Michter’s Art of Hospitality Award last year – first at Asia’s 50 Best Bars 2020 and then The World’s 50 Best Bars 2020 – as we believe hospitality is a vital part of the bar experience and excellence in this sphere should be rewarded. Diego Cabrera and the whole team at Salmon Guru have truly mastered the art of making every visitor to their bar feel special. They create unique moments at every step of the guest journey, from the ingenious drinks to the elegantly eccentric interiors. This win is incredibly well-deserved, and we offer huge and heartfelt congratulations to the whole team.”

Salmon Guru was founded in Madrid in 2016 by Diego Cabrera and is one of the most revolutionary concepts in the bar world, ranking highly at No.22 on The World’s 50 Best Bars 2020 list. A cocktail laboratory managed by Cabrera, who is an icon and one of the most influential people in the bar sector, the stellar team creates curious concoctions to the push boundaries of what’s possible with cocktails. Expect quirky drinks bursting with flavour and served in eye-catching custom glassware. The interior runs the gamut from 1950s tropical to tropes extracted from comic books, and interesting plays on eccentric opium dens. The menu is split by the impact of the drink, be they powerful, fruity, or crazy.

Diego Cabrera, founder of Salmon Guru, says: “Being named the winner of the Michter’s Art of Hospitality Award this year has a special relevance for Salmon Guru in a period as hard as the one we have gone through recently. The team, instead of surrendering, stepped forward, joined together, and doubled our efforts so that our guests can see the excellence we try to convey in the Salmon Guru service. We cried, we hugged and we enjoy the recognition of the industry and that, for us, is really special. It means that our five-year trajectory since opening Salmon Guru is the right one – the art of hospitality has always been one of our main pillars and it will continue to be going forward.”

The World’s 50 Best Bars 2021 list will be unveiled at an in-person ceremony at the Roundhouse, London, on 7th December, beginning at 8.30pm GMT. It will be live streamed on Facebook and the 50 Best Bars TV YouTube Channel.

About The World’s 50 Best Bars

How the voting works

The list is compiled by votes from The World’s 50 Best Bars Academy, which comprises more than 600 drinks experts with 50/50 gender parity, including renowned bartenders and consultants, drinks writers and cocktail specialists from around the world. The Academy of voters is spread across 28 global geographic regions, each headed by an Academy Chair who selects their region’s voters, with the distribution of voters designed to reflect the relative development of the drinks sector, and the concentration of quality bars, in each region. Each voter casts seven votes based on their best bar experiences of the previous 18 months.

Due to limited travel opportunities throughout much of 2020 and 2021, the voting guidelines and voting requirements have been re-evaluated to reflect this. The list will be based on members of The World’s 50 Best Bars Academy’s bar experiences across a voting period between March 2020 to September 2021 inclusive. In 2021, there is no requirement for The World’s 50 Best Bars Academy to cast international votes, although if members have been fortunate enough to travel internationally, they are encouraged to allow these experiences to inform their voting choices. They must vote for 7 bars in order of preference. Voters are required to remain anonymous and voting is confidential, secure and independently adjudicated by Deloitte.

Based in Louisville, Kentucky, Michter’s celebrates an extraordinarily rich heritage tracing back to 1753. The Micther’s team spares no expense in its efforts to produce the greatest American whiskey possible, with tremendous attention given to every step in the production process. Michter’s has received extensive critical acclaim for its line of Bourbon, Rye, Sour Mash, and American whiskeys.