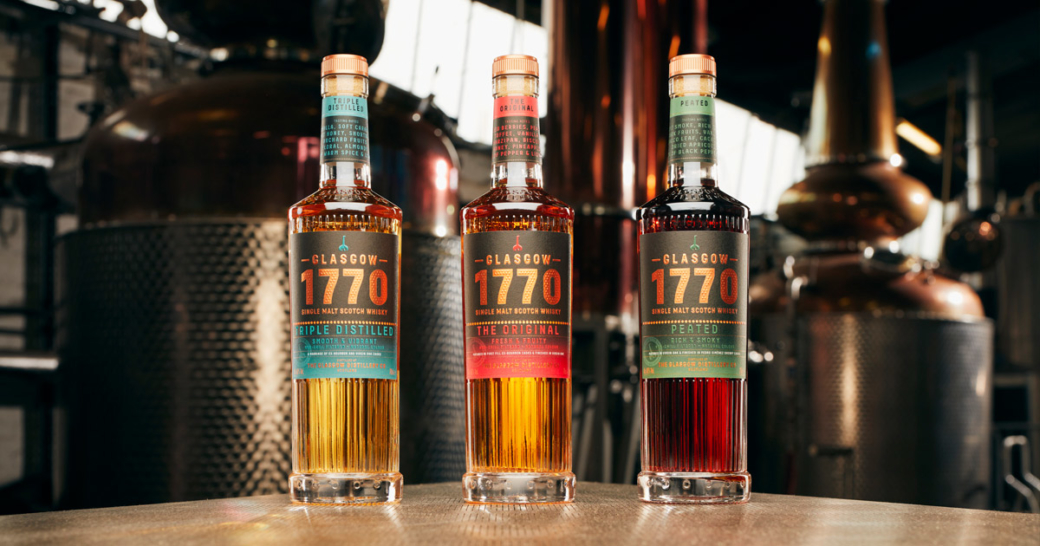 As Scotland begins to bounce back from the pandemic, Scotland’s biggest city is coming back bigger and better than before, and The Glasgow Distillery has the bottle to prove it. From April, the distillery is launching its new 70cl bottle across its range of Glasgow 1770 Single Malt Scotch Whisky as they step up their global presence.

The new design has received the seal of approval from the distillery’s global customers and orders are currently being readied for shipping across the world featuring a more environmentally friendly bottle design using proportionally less glass than the original 50cl bottle.

The distillery’s contemporary whisky portfolio showcases a range and depth of flavour that has proven a hit with consumers since the company released its first Glasgow 1770 expression in 2018. The hands-on whisky making team meticulously craft every single one of the distillery’s three different styles of spirit – unpeated, peated and triple distilled – that draw on the city’s creative and industrial heritage.

The move into the larger bottle size comes at no additional cost, following an increase in production and international growth allowing the distillery to maintain their recommended retail price of £49 per bottle in a commitment to producing spirits with accessibility at their heart. 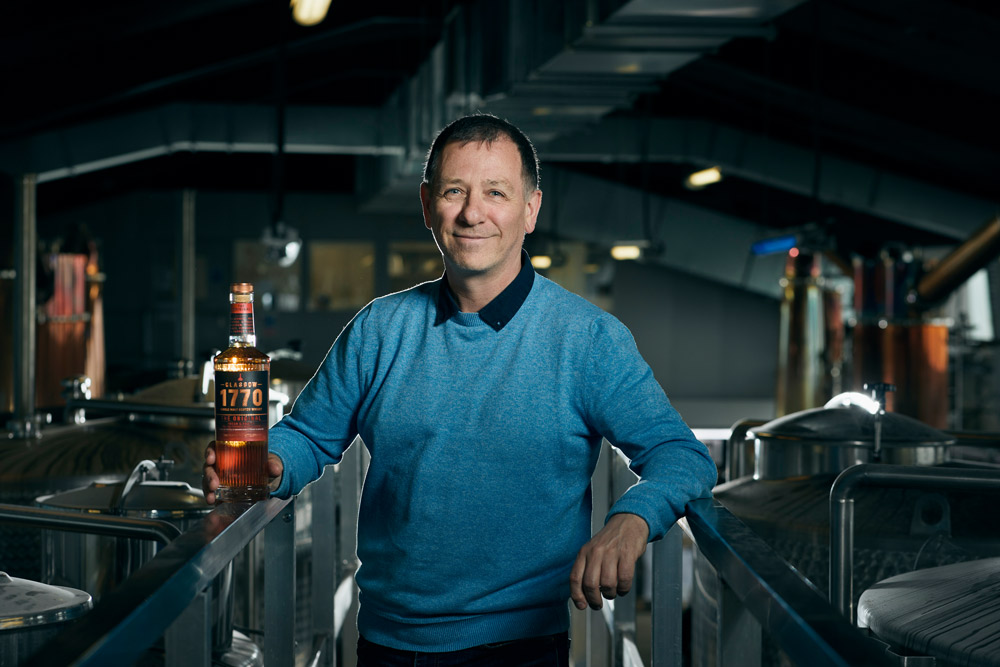 Liam Hughes, Co-founder and CEO of The Glasgow Distillery.

Liam Hughes, Co-founder and CEO of The Glasgow Distillery, said: “As Glasgow springs back to her vibrant self, following a difficult couple of years, at The Glasgow Distillery we wanted to come back bigger too, with a larger bottle allowing us to expand our international exports and open up exciting new markets. The new packaging is already proving a positive move for us as we prepare to ship orders of our single malt to the US; China; Singapore and a new distribution partner in France for the first time. From day one, our mission was to produce a whisky range that is led by flavour and quality, and this new bottle size is another step on that journey. Since our first release in 2018 we have been steadily increasing production across our Glasgow 1770 Signature Range and now we’re thrilled to reveal this bigger bottle with a more environmentally friendly design.”

The transition into the new packaging will come into place for each of the three Glasgow 1770 Signature Range expressions, which are all non-chill filtered and natural in colour. They will be available to purchase via the distillery’s website from 10am on Wednesday 6th of April, 2022 – RRP £49.00. The range will subsequently be available at specialist retailers across the UK then France, Germany, Denmark, Australia, China, South-East Asia and the US with further export markets offering the new pack later in 2022.

Glasgow 1770 is The Glasgow Distillery’s signature single malt and demonstrates commitment to authenticity and quality, realising their mission as contemporary urban distillers. Honouring the heritage of single malt distilling in Glasgow by using the date 1770, paying homage to the original foundation of Glasgow Distillery, before its closure in 1902. Proudly handcrafted in their special copper pot stills, christened: Tara, Mhairi, Margaret and Frances, Glasgow 1770 Single Malt Scotch Whiskies combine the finest Scottish barley and the exceptionally pure water of Loch Katrine to create the finest spirit.

Matured in the finest casks, always non-chill filtered and only ever natural in colour, the Glasgow 1770 Signature Range consists of: The Original, Peated and Triple Distilled; three single malts of sublime quality that have successfully brought single malt whisky back to the city of Glasgow. The Peated and The Original were both awarded gold at The Scotch Whisky Awards in 2020 and 2021 as well as Triple Distilled recently winning gold at International Wine & Spirits Competition. The full range has been named ‘Best Lowland Single Malt’ consecutively for the past three years at the International Whisky Competition.

The Glasgow Distillery Company was established in 2012 by Liam Hughes, Mike Hayward and Ian McDougall. Together, they opened Glasgow’s first independent single malt whisky distillery since 1902, with the unwavering mission to bring single malt distilling back to the city. The company produces an award-winning portfolio of brands including:

Glasgow 1770 Single Malt Scotch Whisky. Launched in 2018, the distillery launched its first batch of single malt Scotch whisky with Release No. 1 selling out within days via an online ballot. The Original has subsequently been followed by the release of a Peated expression in 2019, which is soon to be followed by the release of a Triple Distilled expression in 2020, forming the the third pillar of the distillery’s ‘Signature Range’.

Makar Gin, which boasts an impressive 60 international awards since launch in 2015, including World’s Best Flavoured Gin for their Makar Cherry expression. Banditti Club Spiced Rum, which launched in 2019. G52 Botanical Vodka, which consists of G52 Fresh Citrus and G52 Rich Coffee, which launched in February 2020.