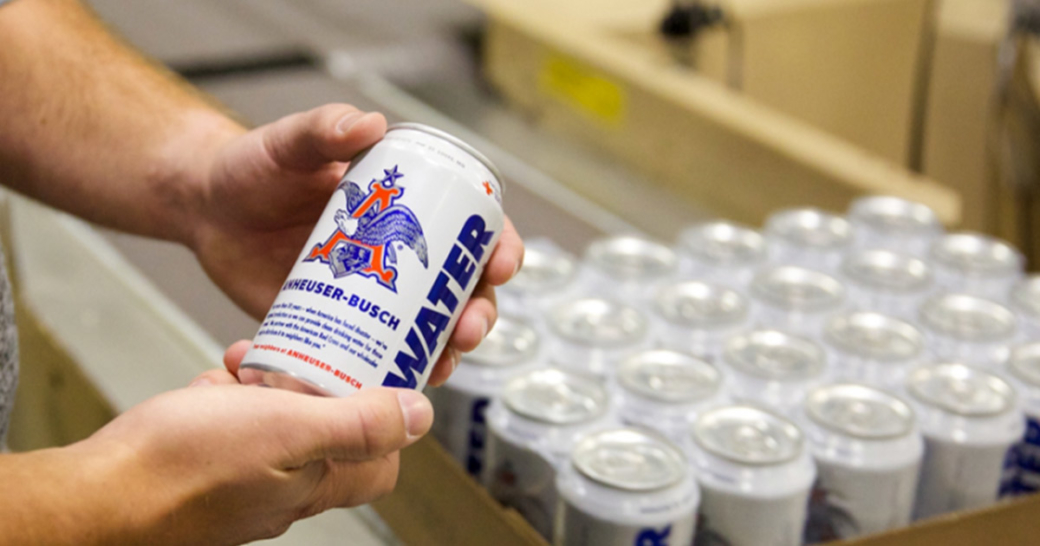 At the request of the American Red Cross, Anheuser-Busch is delivering one truckload – more than 50,000 cans – of emergency drinking water to support local communities in Louisiana impacted Hurricane Delta, which made landfall as a Category 2 hurricane last week.

The donation of emergency drinking water will be delivered to Anheuser-Busch wholesaler partner, Schilling Distributing Co. in Lafayette, LA who will work alongside the American Red Cross to distribute the resources to those in need.

The clean, safe drinking water was produced at Anheuser-Busch’s Cartersville, GA brewery, which alongside the company’s Fort Collins, CO brewery, periodically pauses beer production throughout the year to can emergency drinking water to help communities in times of disaster.

Anheuser-Busch has a longstanding tradition of providing support for disaster relief efforts in partnership with the American Red Cross, dating back to 1906. Since the inception of the emergency drinking water program in 1988, Anheuser-Busch and its wholesaler partners have provided more than 83 million cans of water to U.S. communities affected by natural disasters and other crises.

This year, in the face of a record breaking hurricane and wildfire season, Anheuser-Busch has donated more than one million cans of emergency drinking water to communities impacted by the health crisis and devastating natural disasters – including support of the ongoing wildfire relief efforts and Hurricane Laura relief efforts in Louisiana and Texas.

For more than 165 years, Anheuser-Busch has carried on a legacy of brewing great-tasting, high-quality beers that have satisfied beer drinkers for generations. Today, we own and operate more than 100 facilities, including breweries, wholesaler distribution centers, agricultural facilities and packaging plants, and have more than 18,000 colleagues across the United States. We are home to several of America’s most recognizable beer brands, including Budweiser, Bud Light, Michelob ULTRA and Stella Artois, as well as a number of regional brands that provide beer drinkers with a choice of the best-tasting craft beers in the industry. From responsible drinking programs and emergency drinking water donations to industry-leading sustainability efforts, we are guided by our unwavering commitment to supporting the communities we call home. For more information, visit www.anheuser-busch.com or follow Anheuser-Busch on LinkedIn, Twitter, Facebook and Instagram.

ABOUT THE AMERICAN RED CROSS

The American Red Cross shelters, feeds and provides emotional support to victims of disasters; supplies about 40 percent of the nation’s blood; teaches skills that save lives; provides international humanitarian aid and supports military members and their families. The Red Cross is a not-for-profit organization that depends on volunteers and the generosity of the American public to perform its mission. For more information, please visit redcross.org or cruzrojaamericana.org, or visit us on Twitter at @RedCross.