In April 2021 the Scotch Whisky Association (SWA) sued Vancouver Island’s award-winning Macaloney’s Caledonian distillery. There has been a public outcry and tremendous media support globally and people have been speaking out and defending Macaloney to the SWA.

In response to the many letters of support for Macaloney that the SWA received, the SWA wrote back and claimed to be open to negotiation. However, the SWA’s lawyers have offered zero suggestions for compromise. This directly negates what the SWA claimed.

The SWA lawyers are demanding a confidential non-binding third party mediation. Because of its confidential nature, if no settlement results from this enforced mediation, the public has no way of knowing if the SWA entered this process in good faith, or if it is a tactic to drive up Macaloney’s legal costs. Given the contradictory statements and actions of the SWA up to this point, Macaloney’s is wary of the SWA’s intentions.

The Scotch Whisky Association has a history of going after small craft distillers who wish to celebrate their family or local Scottish-diaspora heritage, including Nova Scotia’s Glenora Distillery (see below), and others across the world with the threat of involving them in lengthy, costly lawsuits. 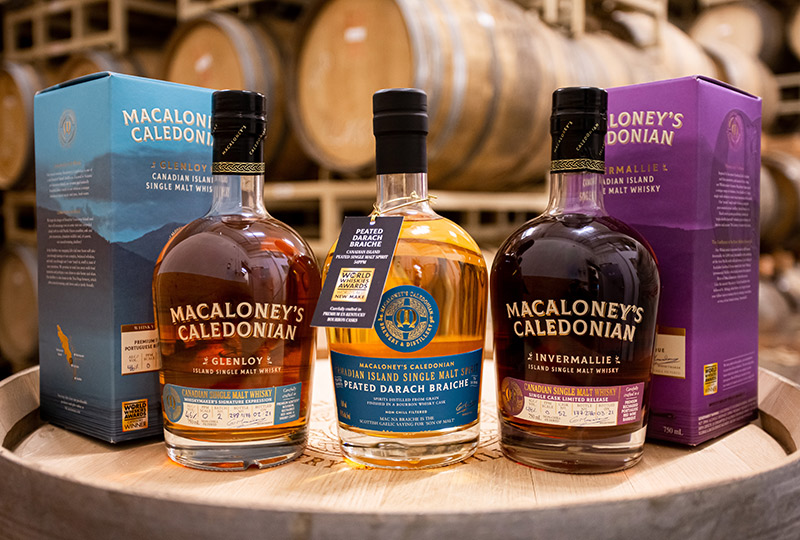 The SWA is suing Macaloney’s over what SWA alleges are ‘names and/or images, whether real or fictitious, which are evocative of Scotland’ including the owner’s family name ‘Macaloney’, the term ‘Island’, the Gaelic words ‘Inver’ and ‘Glen’ (widely used in Ireland, Scotland and Canada) and ‘Caledonian’ (the original name given to the province of British Columbia). The Gaelic word ‘Glen’ was previously settled in Canadian courts after a nine-year legal battle which the SWA lost against Glenora Distillery, Nova Scotia. Scottish whisky reviewer Ralfy recently opined that Canadians have as much right to celebrate their Scottish heritage and that the SWA and its governing council members have no exclusive right to ‘appropriate’ Scottish culture for the purposes of the Scotch industry. He also said the SWA’s actions, funded by Scotch whisky profits, could backfire, leading to a Scotch whisky boycott.

The SWA governing council consists of representatives from 16 Scotch firms, 15 of which are multinational big spirits firms, and one is co-owned by a multinational food conglomerate. They include DIAGEO (three SWA Council seats), Pernod-Ricard (two seats), Edrington (two seats), and William Grants (two seats). No craft distillers are represented on the SWA council. Ironically, DIAGEO own McDowell’s (founded by Scotsman Angus McDowell) and Bagpiper whiskies made in India, and Pernod-Ricard own Jameson whisky made in Ireland (founded by the Scottish family of Jameson). Macaloney’s whiskies are all labelled as “Product of Canada” and list Macaloney’s Canadian address on every bottle.

Public opinion matters – how the public can help

The team at Macaloney’s Caledonian believes ongoing public pressure on the SWA can be an effective way to discourage the SWA from following its punitive lawsuits against craft distillers like Macaloney’s. To write a letter of support, the public is invited to email Graeme Macaloney at Graeme@MacaloneyDistillers.com with the subject line ‘SWA assistance’ and he will provide the contacts to the SWA and its Council.