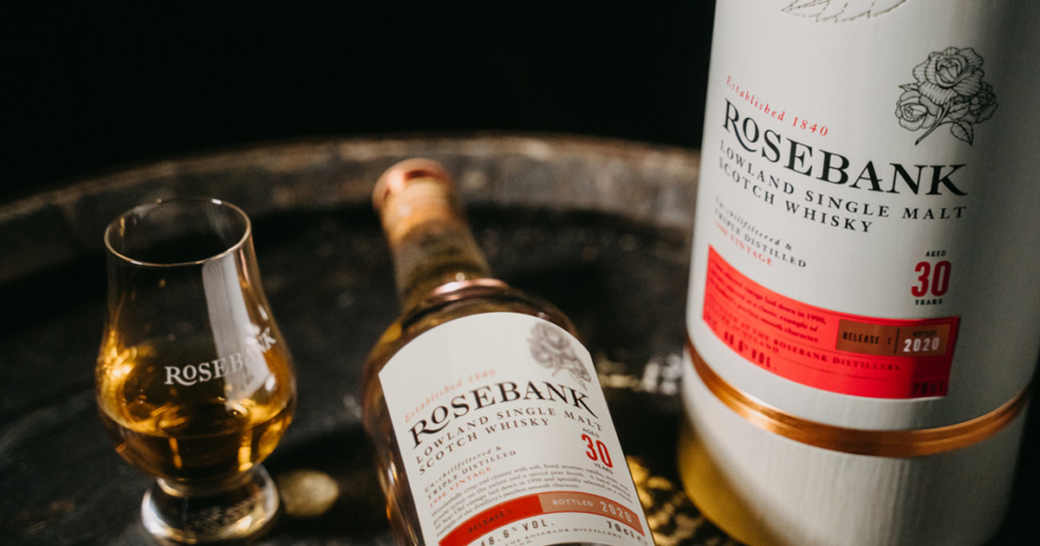 To celebrate this year’s landmark launch, the distillery is giving a select number of customers the chance to “bank” a future expression of the rare liquid.

Rosebank 30 Year Old is a hand-selected vintage, laid down in 1990, shortly before the distillery’s untimely closure in 1993. The limited-edition bottles will be marked Release One, a nod to this new chapter in Rosebank’s legacy. Each year will see a new limited-edition release, laddering up to the first “new” Rosebank spirit under Ian Macleod Distillers.

Only 4,350 bottles of Rosebank 30-Year-Old will be available to buy worldwide, making this an incredibly rare purchase and demand is expected to be high. Bottles are priced at £1,650 and available directly from Rosebank’s website.

Rosebank is also giving its fans and connoisseurs the chance to get more than just a bottle of the rare whisky. The first 200 people to scan the QR code on the neck collar of their Release One bottle will be given the opportunity to enjoy a dram of Release Two at their nearest high-end, luxury bar or whisky retailer in 2021 as well as the chance to receive an early link to purchase Release Two before the general release. (A list of participating outlets for these customers to choose from will be sent to them in early 2021.)

Robbie Hughes, Group Distillation Manager for Ian Macleod Distillers, said: “The first global release of Rosebank 30 Year Old is a truly iconic moment for the distillery. It has matured in 62% refill sherry butts and 38% refill bourbon hogsheads for decades, patiently waiting to be awoken, and delivers layers of incredible flavour that you won’t find in other whiskies.”

“What makes Release One so exciting is that we’re giving Rosebank fans the chance to join us on this monumental journey over the next decade, as we revive the iconic distillery. With a chance to “bank” exclusive access to next year’s release, we’re not only inviting them to become part of Rosebank’s legacy, but to become part of Rosebank’s family.”

Ahead of its official release, Rosebank invited some of the world’s top whisky writers to enjoy the “First Sip” of Rosebank 30 Year Old, capturing their initial reactions to the bottle and whisky itself on camera. Renowned and celebrated writers including Felipe Schrieberg (USA), Alice Lascelles (UK), Mamoru Tsuchiya (Japan), Martin Eber (Australia/Hong Kong), Bernhard Schäfer (Germany), and Thijs Klaverstijn (Netherlands) feature in the short video, having received no tasting notes or samples in advance. See their reactions here.

Rosebank 30 Year Old’s launch also comes shortly after the brand released two limited edition, single cask whiskies in February (Cask No. 433 and Cask No. 625) and a Travel Retail exclusive 1990 Vintage Release in March, much to the delight of fans. Only 100 bottles of each 1993 Single Cask bottlings were made available via online ballot, with over 3,000 people entering for a chance of purchasing one of the rare bottles. The ballot was temporarily paused due to COVID-related restrictions, with the final successful entrants set to be drawn before the end of the year.

These releases come after Ian Macleod Distillers acquired the Rosebank brand and last remaining stocks in October 2017 and were granted planning permission to revive the distillery on its original site in January 2019. In November 2019, construction officially began on the highly anticipated redevelopment – with expansive plans for a 1,000-square metre, energy-efficient distillery, including a state-of-the-art visitor centre, tasting room, shop and warehouse among the canal-side buildings.

Once open, Rosebank Distillery is expected to generate 25 full-time jobs and attract around 50,000 visitors a year to Falkirk. It will offer a wide range of distillery tours, with some featuring the very last drams of Rosebank distilled prior to the 1993 closure.