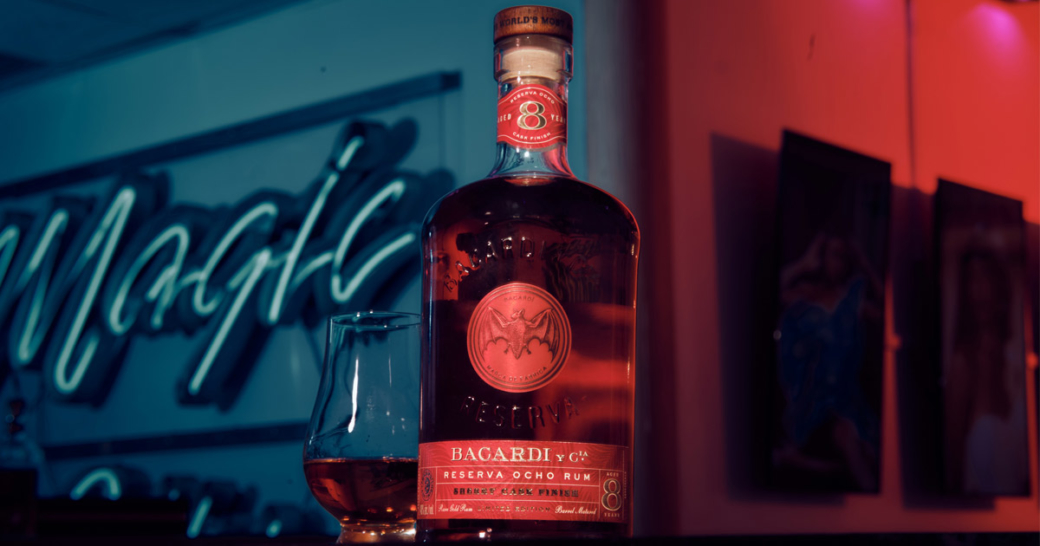 To kick off National Rum Day, BACARDÍ® rum today announced it is expanding its Premium portfolio range with the launch of a limited-edition BACARDÍ Reserva Ocho Sherry Cask Finish. This new rare rum offering marks the start of a five-year collection, which will see BACARDÍ unveil a new cask finish offering annually through 2025, with the cask finish changing each year based on the type of barrel used for the additional aging.

Each of the Premium rums from the BACARDÍ Reserva Cask Finish series will begin with a base of BACARDÍ Reserva Ocho, aged under the Caribbean sun, and then finished for several additional months in a unique barrel that will change year to year. The finishing process differs from the aging process by increasing the complexity of the spirit – in this case, adding subtle notes of chocolate and almond, which are not typically found in BACARDÍ Reserva Ocho.

This year’s inaugural release has been aged in American oak barrels for eight to 12 years and finished in an Oloroso sherry cask for just over two months. These additional few months in the sherry cask allow the blend to take on a sweet, smooth velvety texture with notes of caramel, vanilla, and orange, along with hints of walnuts and almonds. The result is a deep mahogany flavor that gives off the aroma of dried fruits, raisins, walnuts, and almonds. This luxurious libation is best enjoyed neat in a room temperature tasting glass to bring out the full flavors of the finish.

A family-owned brand, BACARDÍ has been creating premium rums for dozens of years in collaboration with its deeply knowledgeable Maestros de Ron (Master Blenders), all carefully chosen and trained in seven generations of rum-making expertise who then shape and carefully craft all of the products. The rum blends from the new Reserva Cask Finish series are similarly crafted by BACARDÍ Master Blenders who selected the esteemed BACARDÍ Reserva Ocho as the base because it is based off of the original recipe from the family reserve created in 1862 and is a symbol of the brand’s heritage. The Oloroso sherry cask was chosen as the first finish in the series due to its origins from Spain, much like BACARDÍ founder, Facundo Bacardí Massó,

“We could not be more thrilled for the launch of BACARDÍ Reserva Ocho Sherry Cask Finish to add to our Premium portfolio for a limited time. This is our first innovation for the Premium range since the portfolio first launched in 2018, and we are excited to introduce four more innovations over the course of the next four years,” said Lisa Pfenning, Vice President, BACARDÍ for North America. “We have seen an increased popularity in Premium rums throughout the years, namely sipping rums, and we hope our rum enthusiasts will appreciate the care and craftsmanship that has gone into blending the Reserva Cask Finish series – which will add new layers of beautiful and bold flavors to our smooth aged rums. Not only will the taste appeal to rum drinkers, but we believe that whiskey drinkers will find themselves reaching for a bottle of BACARDÍ Reserva Ocho Sherry Cask Finish as well.” 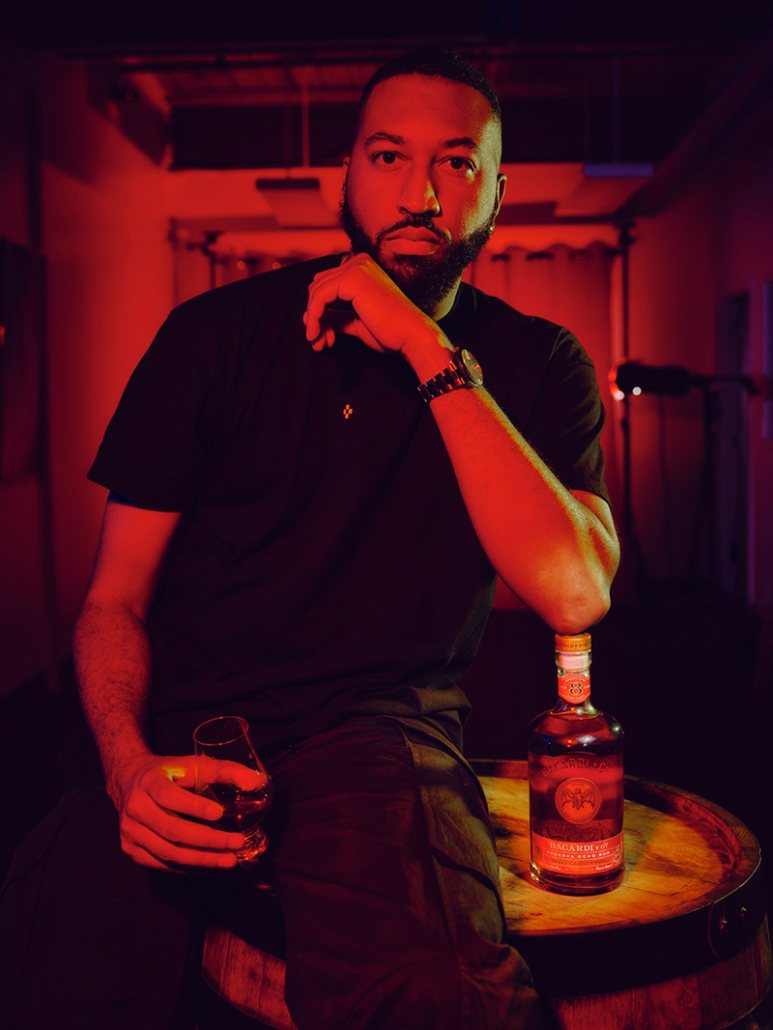 According to the Distilled Spirits Council of the U.S., the rum category revenue increased by 5.9% in 2020, with most of the growth attributed to High-End Premium (8.7%), Premium (7.5%) and Super-Premium (3.7%) categories. Premium rums are an increasingly growing segment and there is no better time to announce the launch of the new program than this very moment. According to Nielsen, Rum Cask Finishes revenue is growing by over 190%. As Cask Finishes are most commonly found within the whiskey segment, BACARDÍ is seeking to entice whiskey drinkers to explore outside of the category through the launch of its new five-year Reserva Cask Finish Series. Be sure to keep an eye out to see when the next four finishes will be announced through 2025.

To accompany the launch of this new product, BACARDÍ is teaming up with famed celebrity photographer, Cam Kirk, to create an original NFT (non-fungible token) inspired by the BACARDÍ Reserva Ocho Sherry Cask Finish. The partnership between BACARDÍ and Kirk is the embodiment of the rum brand’s ethos, Do What Moves You, which is a guiding principle rooted in self-expression and connectivity, celebrating creativity and individuality – something that Kirk puts forward in each of his many endeavors. The synergies between Kirk and BACARDÍ, formed by their shared passion for music and desire to move people both physically and emotionally, laid the groundwork for a natural partnership.

In 2019, Kirk launched the “Collective Gallery,” the first-ever record label-esque company for photographers that seeks to help emerging and established photographers manage everything from content distribution to touring and merchandising. Throughout his illustrious career, Kirk has shot the likes of Migos, Gucci Mane, and T.I. in addition to producing projects for Nike, Beats by Dre, and Atlantic Records and now, the Sherry Cask Finish collaboration will enable Kirk to explore a new type of photographic medium in rum.

“Every time I take on a new project, I approach it with the highest level of precision and passion. I saw that exact precision and passion from the Master Blenders when they introduced me to the new Sherry Cask Finish and it was my honor to capture it for a fellow rum fan,” said Kirk. “This is my first-ever NFT, so I knew it had to be a truly special collaboration.”

Earlier this month, Kirk captured exclusive, behind-the-scenes content of the all-new Sherry Cask Finish. The resulting NFT will live as a piece of art showcasing the new cask finish, interlaced with digital effects and interactive motion graphics. This will be both BACARDÍ and Kirk’s first-ever NFT, which will go on sale on September 1 on BACARDICaskNFT.com for only two weeks.

Proceeds from the NFT sale will directly benefit the “Backing the B.A.R.” initiative, presented by the NAACP and sponsored by family-owned Bacardi. The initiative provides business acceleration grants, education, support, and entrepreneurship solutions for Black-owned bars, restaurants, nightclubs, lounges, liquor stores, and small businesses in the process of applying for a liquor license.

The new BACARDÍ Reserva Ocho Sherry Cask Finish is available in 750mL bottles with a 40% ABV for a suggested retail price of $32.99 and will be available online and in stores nationwide, starting in September.

To purchase BACARDÍ rum and cocktail kits, head to www.DrinkBACARDI.com, and for more information on BACARDÍ rum, visit www.BACARDI.com.

About BACARDÍ® Rum – The World’s Most Awarded Rum

In 1862, in the city of Santiago de Cuba, founder Don Facundo Bacardí Massó revolutionized the spirits industry when he created a light-bodied rum with a particularly smooth taste – BACARDÍ. The unique taste of BACARDÍ rum inspired cocktail pioneers to invent some of the world’s most famous recipes including the BACARDÍ Mojito, the BACARDÍ Daiquiri, the BACARDÍ Cuba Libre, the BACARDÍ Piña Colada and the BACARDÍ El Presidente. BACARDÍ rum is the world’s most awarded spirit, with more than 900 awards for quality, taste and innovation. Today, BACARDÍ rum is made mainly in Puerto Rico where it is crafted to ensure the taste remains the same today as it did when it was first blended in 1862. www.BACARDÍ.com

The BACARDÍ brand is part of the portfolio of Bacardi Limited, headquartered in Hamilton, Bermuda. Bacardi Limited refers to the Bacardi group of companies, including Bacardi International Limited.